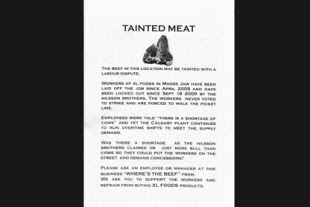 CANADIAN LABOUR-MOOSE JAW:
XL BEEF BOYCOTT ?:
As Molly reported last October 18 members of UFCW Local 1400 have been locked out since late September at the XL Beef plant in Moose Jaw Saskatchewan. Since then the workers have been walking the picket line and trying to keep their spirits up. XL workers are beginning to ask the public for a boycott of XL products, as the following story from the Moose Jaw Times Herald says.


XL Foods in Moose jaw is owned by XL Foods in Calgary which, in turn is owned by Edmonton based Nilsson Brothers Group. The company claims worldwide exports, and it seems to me that any consideration of a boycott should be national or even international. XL products are sold under their own label and also the label of 'The Original Alberta Beef'. The company operates slaughter and processing facilities in Alberta and Saskatchewan.
Here's the story from the Moose Jaw Times Herald.
••••••••••••••••••••••••
Locked out XL Beef employees start boycott campaign:
Shoppers at Moose Jaw grocery stores on Friday might have seen individuals passing out pieces of paper reading “Tainted Meat.”
However the word “tainted” wasn’t referring to the quality of the meat, but rather how unionized XL Beef employees feel about the ongoing labour dispute with the employer.
Norm Neault, United Food and Commercial Workers (UFCW) Union Local 1400 president and spokesman, said employees are asking for community support by way of a local boycott on XL products.
Although UFCW hasn’t asked Saskatchewan Federation of Labour for support with the boycott yet, Neault said it will.
He said although it may seem difficult, the union is urging residents to help bring an end to the lockout by asking store clerks and managers which are XL, and then avoiding the purchase of such items.
According to Neault, Friday was the first time the union members handed out pamphlets as part of a boycott campaign
••••••••••••••••••
According to this further article from the Moose Jaw Times Herald the Saskatchewan Federation of Labour (SFL) is hesitating about whether to endorse the boycott.
••••••••••••••••••
Saskatchewan Federation of Labour to consider supporting XL boycott:
If the Saskatchewan Federation of Labour (SFL) chooses to support the local XL boycott, it will only do so after thorough consideration.
“We don’t take boycotts lightly, because once started, they’re hard to turn off,” SFL executive assistant Don Anderson told the Times-Herald on Monday.
MOLLY NOTE:
I really have to call a time out here. What could possibly be good reasons for calling off a boycott ? One would be that the strike has been won in which case the boycott virtually calls itself off as the news is disseminated. Another is that the strike is really, completely and truly lost in which case you might as well keep the thing going out of pure spite and punishment of the victor. Another would be that the workers (not a union head office) involved themselves ask for its cancellation for whatever reason. This is also virtually self cancelling. Yet another is that there is a court judgement that leads to the bailiffs coming and seizing union assets all the way down to the light sockets and the toilet seats. Any tin pot lawyer whose whisky consumption is less than 26oz/day should be able to protect the union against that one. What is not a good reason is any desire of union officials to have complete and total control over any such boycott- just for the sake of having such control. OK, time out over.
On Friday, XL Beef employees were at grocery stores, handing out pamphlets encouraging local shoppers to boycott XL products.
Norm Neault, United Food and Commercial Workers (UFCW) Union Local 1400 president and spokesman, said the union is urging residents to help bring an end to the lockout by them asking store clerks and managers what products are XL products, and then avoiding the purchase of such items.
Neault said the union would also ask for support from the SFL.
According to Anderson, the provincial organization will take that application and contact all other unions within its membership that might be impacted by the boycott. If SFL decides to support the UFCW initiative, Anderson said his staff would encourage all 95,000 SFL members and their families to stop purchasing XL products. ( Well, I bloody well hope so-Molly )
Posted by mollymew at 12:26 PM

I use XL meats at my work. Maybe I'll ask to be put on a different section to not use it, but I don't think I could earn a wage if I boycotted... As much as I want to.

Ah, another call for the wisdom of Molly 'Solomon' Mew. Here's what I'd suggest.
1)You can't influence whether the beef is used or not whether you stay or transfer oe even quit. It's out of your hands. The employer is unlikely to see things your way.
2)There is, however, nothing that says you can't engage in idle chit chat, either to customers or other employees. Enough such offhand mentions and it may happen that more customers order chicken or fish instead. Beef consumption falls. Less beef will ordered from XL.
Good luck Slim, and keep the chit chat "offhand".