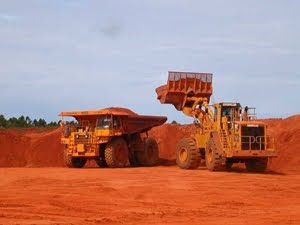 The following appeal for solidarity with fired workers at the Bauxite Company of Guyana comes from the online labour solidarity site Labour Start.
GLGLGLGLGLGLGLGL
Guyana: Stop union-busting - respect workers rights
57 trade union leaders of the Guyana Bauxite and General Workers' Union (GBGWU) were summarily sacked, without recourse, in late 2009 when miners at the Bauxite Company of Guyana Inc. (BCGI) went on strike. BCGI is 90% owned by the Russian aluminum company RusAl and 10% by the government of Guyana.

Subsequently, BCGI has used coercion, intimidation, and fear to get workers remaining on the job to sign a deauthorization petition in order to decertify GBGWU. RusAl and BCGI managers have held captive meetings in which they used threats and intimidation to get workers to sign the petition and to turn away from their long-time union.

Such actions are flagrant violations of core labour standards, and the GBGWU is requesting that labour activists worldwide register that complaint directly with Guyana's Minister of Labour. The message is that he halts this employer-perpetrated, union destroying initiative immediately.
GLGLGLGLGLGLGLGL
The Letter:
Please go to this link to send the following letter to the Guyanese authorities.
GLGLGLGLGLGLGLGL
Mr Manzoor Nadir, Minister of Labour, Human Services, and Social Security, Republic of Guyana

I write to urgently request that you fully examine the elements surrounding deauthorization of trade union Guyana Bauxite and General Workers’ Union (GBGWU) at the mining company BCGI. As one who has followed this dispute since late last year, I believe that management of this bauxite mining operation has used coercion, intimidation, and the duress of workers during a very difficult time to unfairly capture signatures on a petition in order to dismiss GBGWU as the lawful bargaining representative.

Your government, through the Ministry you direct, is in violation of these paramount global labour standards if you allow management interference to intercede in workers' legitimate right to freely and openly select the union of their choice.

Yours Sincerely,
Posted by mollymew at 12:44 PM