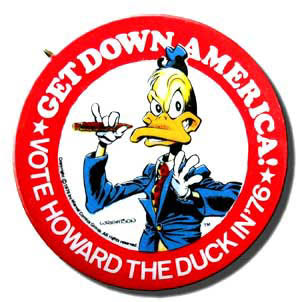 STEVE GERBER, CREATOR OF 'HOWARD THE DUCK' DIES AT AGE 60:

While browsing my links earlier today I came across a sad item on the Commie Curmudgeon blog. It seems that one of my old favourites, Steve Gerber, who created the immortal 'Howard the Duck' character for Marvel Comics way back when passed away on February 10th. he died in a Las Vegas hospital of complications due to pulmonary fibrosis. The author of the Commie Curmudgeon blog pays Steve a tribute by describing how much of an influence he was on him at the time. Read the item to see how Gerber, the Ramones, Patti Smith and Harlan Ellison are all connected.

STEVE GERBER
Gerber was born in 1947 in St. Louis and received a bachelor's degree from St. Louis University before joining Marvel as an assistant editor in 1972. His most famous character was created in 1973 by Gerber and Val Mayerik as a secondary character to the Man-Thing in Adventure into Fear. He graduated into his own back-up feature in Giant-Size Man-Thing in which he starred in a number of horror-parodies such as fighting a vampire cow called Bessie the Hell Cow.

HOWARD THE DUCK
In 1976 due to Howard's immense popularity he was awarded his own book, and Gerber wrote 27 issues of the series. Gerber used this platform to present a great number of subversive and radical ideas, and in 1976 he also launched his 'Howard the Duck for President Campaign'. Howard's plight as a duck "trapped in a world he never made", a world populated by 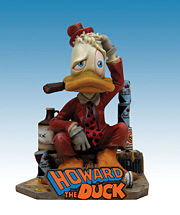 what Howard called "hairless apes" , nonetheless was a premier platform for both satire and political comment. In between fighting the 'Kidney-Lady' and turnips from outer space Howard would find himself in story lines that mocked the American political system of the time.

Howard entered the 1976 American presidential race when he was hired as a security guard for the New York convention of the 'All-Night Party'. When he prevents an assassination attempt on the party's candidate he is, in turn, nominated by popular acclaim. He accepts the nomination because "he has nothin' planned between now and November". Howard's speech writers, whom he never gets to meet, create all of his so-called platform, and when his campaign manager tells Howard the "facts of life", that politicians don't have programs but merely repeat sound bites Howard's response is to bite him in the nose. Howard's campaign, unfortunately, ends in scandal as he is caught in bathtub photos with his side-kick Beverley "Thunder-Thighs" Switzer. From here he and Beverley flee to Canada where he defeats the supervillian 'Le Beaver'. The pair had linked up in the "tropical paradise" of Cleveland where poor Howard was first deposited from his parallel universe when "the cosmic axis shifted".

The 'Howard the Duck for President' campaign took off. This was, after all, a time when farce candidates for elections were all the rage. The grand-daddy of them all was probably the Yippies' 'Pigasus 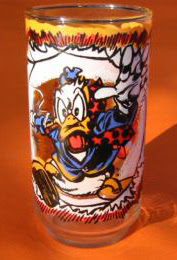 ', a pig running for president, but there is little doubt that Howard's campaign appealed to a much wider demographic than that 1960s effort did. This was also when Molly had some brief contact with Gerber. I had been a comic collector for many years and often liked to write to their letter pages (yes even occasionally defending anarchism in same, though that was hardly the subject of the vast majority of my letters). Because my name was known down at Marvel I managed to make contact with Gerber himself. At the time our anarchist group had its own farce candidate, Tom Turkey (a real turkey) whom we ran for every office under the Sun, from Prime Minister to head of the local Teamsters' Union and many others besides. While we were Canadians, and therefore not entitled to participate in American elections The Friends of Tom Turkey were still appointed as the "official outside agitators committee" for Howard's campaign. I guess we were about as "outside" as you could get. Those were fun days...
In 1978 Gerber and Marvel clashed over creative control of the series, and Gerber was suddenly removed from the series. This was the first major "creator's rights"case in American comics, and many in the industry rushed to Gerber's defense to create protest/parody stories, such as Destroyer Duck ,created along with Jack Kirby. Seems that Gerber's freewheeling and experimental style had become a little bit too much for the Marvel bureaucracy to handle. This was also the time when the 'Evil Mouse' entered the picture as Disney began to threaten copyright lawsuits over the character, forcing Howard to actually !!! put on pants to distance himself from the Evil Mouse ducks. I'm not kidding ! The Howard the Duck series didn't last long after Gerber's departure. It was cancelled with issue # 31 in May, 1979.
Marvel then tried to relaunch the series as a bimonthly, but without Gerber's input this project fizzled after only 9 issues. Gerber later became reconciled to Marvel, and Howard continued to appear fitfully as a secondary character in many of its comics. In 2001 Marvel launched its "mature readers" MAX series, and Gerber wrote a six issue Howard the Duck miniseries with considerably stronger language and sexual content than what was considered popular back in the 1970s. In the last few years Howard has occasionally popped up as a side character in She-Hulk. If you want to read the full history of Howard and his times check out the Wikipedia article on same.
Goodbye Steve. You'll be sorely missed.
Posted by mollymew at 5:37 PM

Greetings from a fellow anarchist. Looks like you're the real deal, as well! If you link to the Kate Sharpley Library, I know you've got your head screwed on proper.

Yup,
The Kate Sharpley Library is listed in the Links section.
Molly with the screwy head.
P.S.
I'll try and find your blog and list it. Please check out our links section.