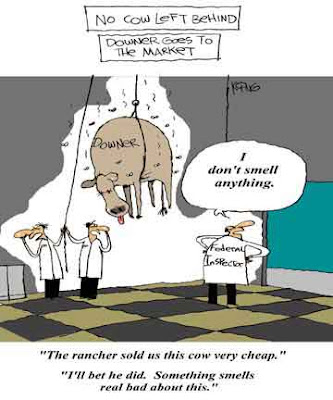 FOOD SAFETY:
DOWNER COWS AND YOU:

Slaughterhouses have long been famed as one of the grimmest places to work, and the grimness has often spilled over to affect the surrounding society. Poisoning of the workers in such places ends up poisoning society in general. Upton Sinclair's classical 1906 novel 'The Jungle' created such outrage in its day that it led to the first federal legislation that was supposed to protect the public against adulterated and unsafe foods. Numerous scandals since that time, especially in the past few years, have shown that such efforts at regulation are very much too little and too feeble.
DOWNER COWS:
The term "downer cow" is an old one in the livestock industry. In past years it referred almost exclusively to cattle suffering from various metabolic problems or simple lameness. Even today such causes account for the vast majority of cases (see a review at the Penn State Veterinary Extension Outreach site). In past years the term was rather loosely defined as a cow unable to stand and walk in the absence of any obvious physical deformity. Even back then the use of downer cows in the meat supply was problematic as meat from such animals is much more likely to contain unacceptably high levels of E. coli (try laying in your own feces for awhile and see what happens). The arrival of mad cow disease (bovine spongiform encephalitis) gave a whole new sense of urgency to what was previously a mere common sense conclusion- it's unwise to eat meat from diseased animals. Neurological signs will, of course, make you just as much of a "downer" as imbalances in calcium or magnesium. The USDA responded with policies that supposedly prohibited the use of downer cows for human consumption. Supposedly...
A FRESH SCANDAL:
Despite the prohibition things often carried on very much as before. The privately-run meat industry is, after all, driven by a very strict profit incentive. Margins are often quite tight, and corners are often cut. In addition the meat inspection process, as this article makes plain, is often underfunded and overstretched, driven more by the appearance of "seeming to be doing something" than by any actual realistic appraisal of what it takes to protect public health. so-called "inspection" often involves the veterinarian looking over 100s of animals at once from an overhead catwalk.

Over the past years the number of recalls due to detection of E. coli has steadily increased. Five in 2005. Eight in 2006. Twenty one in 2007. If this was not enough of a wake-up call the unprecedented pet food recall of last spring should have served as a warning sign. But things continued on as usual, and the people who sprung the goods on exactly what is happening in at least one major US beef processor (and probably in the majority of them), Westland/Hallmark Meat Company, based in Chino, California, were not the USDA inspectors. Last fall the Humane Society of the USA surreptitiously took film footage of what was exactly happening at Westmark's plant. For six weeks the Humane Society videotaped incidents of how workers at the plant would kick sick cows who were unable to rise and even use forklifts to speed them on to the slaughter line. The video is available HERE at the Humane Society site.

This meant that meat from diseased animals was consistently released into the human food chain. The Humane Society released their video last January 30th. With its usual lightning speed, well documented in last spring's pet food recall,(see numerous entries in the archives of this blog for last spring's pet food recall) the USDA finally ordered a recall of beef from the plant in question on February 17th !! The recall, involving 143 million pounds of beef dating as far back as February 1, 2006, was the largest ever in US history. Reassuring(???) noises were made that "most of the product had already been consumed". Two year old burger ! I certainly hope so. Of the beef recalled 37 million pounds went to make school lunches and to other federal nutrition programs. According an article on Yahoo News last Sunday 150 school districts and the fast food chains Jack-In-the-Box and In-N-Out have already stopped using ground beef from Westland/Hallmark. Other chains such as McDonalds and Burger King claim to not buy product from this company. It should be noted that this company was merely the one that the Humane Society sent its agents to. There is no proof that other companies are innocent of the practices revealed at Westland/Hallmark.
WHAT CAN YOU DO ?
Just like it was the early 1900s all over again the United Farm Workers have been struggling for years now to unionize and improve conditions in US slaughter plants, feedlots, etc.. The struggle for decent working conditions is intimately tied to the provision of wholesome and safe food for the public. The UFW have been instrumental in exposing many health scandals in the agricultural industry, scandals that affect workers first and then consumers. They are asking you to take part in an online survey on the subject of these recent scandals, the results of which they hope will lead to reform of the US food system. Their statement follows...
UFW STATEMENT:
"Bothered by the Beef Recall? Please take our survey.
In light of last week’s beef recall--the largest ever in U.S. history—we wanted to ask for your feedback on the food safety issue.On Feb. 17, The Westland/Hallmark Meat Company had to recall over 143 million pounds of raw and frozen beef products dating back to Feb. 1, 2006 after the USDA’s Food Safety and Inspection Service (FSIS) learned that the cattle were not being properly inspected, according to a statement by Secretary of Agriculture Ed Schafer. Because of the improper inspection of the cattle, “FSIS has determined them to be unfit for human food and the company is conducting a recall.”
USDA officials announced the recall Sunday after the Humane Society of the United States released undercover video showing crippled and sick animals (“downer cows”) at the slaughterhouse being shoved with forklifts. Officials estimate that about 55 million pounds of the recalled beef went to USDA nutrition programs, the bulk of it for schools, as part of the National School Lunch Program. Westland/Hallmark meat had also been used for the Emergency Food Assistance Program and the Food Distribution Program on Indian Reservations.
Consumer safety is of topmost importance to us as agricultural workers rely on making their living by producing the food we eat. They handle our food before it reaches our tables; are the ones who observe firsthand what safety practices are or are not being followed and we believe--if trained and given a voice--can play a key role protecting consumers. We’ve heard from workers about concerns they have regarding food safety, but without a union contract that gives them the ability to speak up, many are afraid of losing their jobs.
We are asking for your feedback to understand how these incidents have affected how you look at the food you and your family are eating. Please take a moment to fill out the following online survey.
Thank you!"
You can access the survey at http://www.surveymonkey.com/s.aspx?sm=dEE6vB6qSqhEl7zrsZTjlw_3d_3d
Posted by mollymew at 7:49 AM