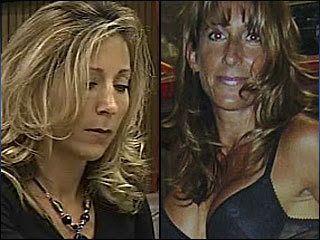 THE WILD WORLD OF POLITICS:

"LINGERIE MAYOR" REFUSES TO STEP DOWN:

Arlington, Oregon , with all of its 524 inhabitants, is hardly the throbbing centre of the universe. The town is small enough that it has a list of upcoming birthdays on its official website. Yet the mayor of this town, one Carmen Kontur-Gronquist, has brought this little burg into international prominence. Some years before she was elected she posed for a few photographs on the town's fire engine, clad in black underwear. Kontur-Gronquist is also the executive secretary of the local fire department as well as working in a local health clinic. She then posted them on a My Space site that a relat 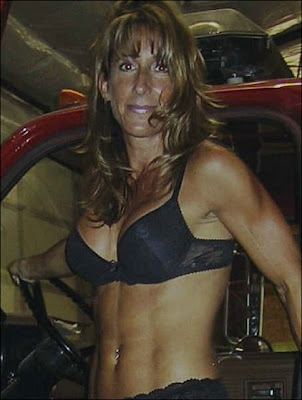 ive of hers had set up in hopes that it might help her to have a larger social life. Ah well. I don't know if this move worked very well. One can imagine the pictures and contacts she received in reply. Molly's first suggestion would have been a name change. "Carmen" is OK, but "Kontur-Gronquist" just doesn't fly. Sounds like something out of Conan the Barbarian. Carmen is a single mother, and her hyphenated name suggests that she has little discretion in mate choice beyond choosing the ape with the loudest grunt. Carmen has suggested that she intended to use the photos in "a contest about fitness in women". As you can see from the photos she is indeed "fit" in a physical sense. Carmen wears her 42 years very well.
All that is neither here nor there. In typical hothouse "politics" fashion Carmen replaced a clique that had apparently been more than a little loose with the public purse, according to commentators from the area where she lives. It is suspected that the photos were brought to light as an act of retaliation on the part of those who were cut out of this little (tiny,itsy,bitsy) honey-pot. Other commentators on the blogosphere have noted that the photos reveal little more than any bathing suit picture- somewhat less actually. In any case the town of Arlington(which actually!!!!! is incorporated as a "city" with all of its 524 inhabitants-I shit you not) has received such publicity from this little kerfuffle that a cynical observer would suspect that BOTH the Mayor and her supposed "opponents" who think she has disgraced the "city" were in on some sort of con-game to increase tourist dollars for the "western experience" of riding horses, or at least one horse in this one-horse town. It may or may not be true that her local opponents have mounted a campaign to demand that she step down as Mayor before her term expires in 2009. Perhaps they indeed do want to get their hands back into the kitty, no pun intended.
OK, here's the denouement. The town's website has yet to mention this "event" that brought them international fame. To this time their only claim to fame was that they were named after the birthplace of Robert E. Lee. Whoop-de-do-da. The town website is actually the website of their high school baseball team. It is...hold on to your shorts...'Home of the Honkers'. Oh my God ! Only in America ! I wish the town well, all 524 of them in that thriving "city", and if this is a fake then they deserve all the tourist dollars they can get.
Keep smiling. Humour is yet alive in the USA. In any case Molly wants to award Carmen one of her Molly no-prizes. Why ? For being one of the few examples in human history of a politician actually doing a real public service. I wish her well in finding the next source of genetic material for her reproductive purposes. Just avoid anyone with the first name of "Ooog". That Molly, she is so free with her wise advise. Maybe I should get my own TV or radio show. Move over Dr. Phil; there's a new cat on the tube. Gotta make some money off all this wisdom.
Posted by mollymew at 1:48 PM