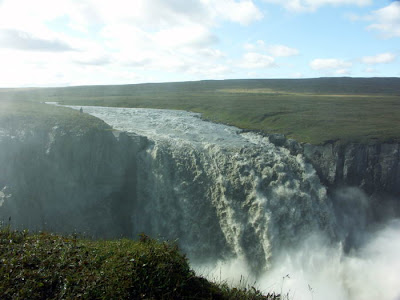 ICELAND:
ANARCHISM IN ICELAND:
Molly recently read an interesting report on the A-Infos site from 'Siggi' in Iceland. As I have said repeatedly on this blog present day anarchism has perhaps the greatest geographical extent that it ever has had, even if one looks back to the heyday of anarcho-syndicalist unionism. Proof of this may be that there is an anarchist movement in the country of Iceland. the author of the report has a name that is familiar as he has previously written to Any Time Now. Have a look at the report. Seems that anarchism in Iceland today is basically counter-cultural "punk" and ecological in orientation. The website Saving Iceland gives the flavour of some of their activities. It is in English. They also have a website in Icelandic at http://www.andspyrna.org/ . Rather a difficult language as Molly is given to believe. The Icelandic anarchists even have their own local library in the capital Reykjavik, provided to them by the local peace movement, and they have been engaged in translations of anarchist texts such as Nicolas Walter's 'About Anarchism' and Harold Barclay's 'The State'. The library is looking to expand, and donations of books, zines, etc. are welcome. Contact Siggi at punknursester@gmail.com or write Andspyrna at Box 35, 101 Reykjavik, Iceland.
As an aside Molly has learned while looking up this subject that medieval Iceland has often been held up by the so-called anarcho-capitalists as a functioning anarchist society operating via their principles. How true this is I don't know. It is certainly something that I am sure the present day Icelandic anarchists would disagree with.
Posted by mollymew at 5:23 PM

I sent Siggi a whole pack of pamphlets some years ago, when there was almost nothing happening with anarchism in Iceland. Good to see all those young folks getting involved.

As for ancient Icelandic society, Harold Barclay also sees it as having been close to a stateless society, though he would not hold it up as an ideal, which I suppose some A-caps do...

Hello,
me and my boyfriend love iceland and we want to emigrate, but we are both skinheads and need a szene. do you know if there is any skinheadscene in iceland?
thanks, melu