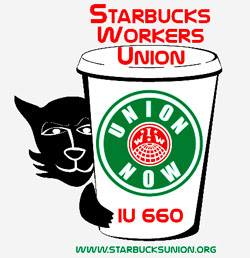 USA
STARBUCKS- HONOR MARTIN LUTHER KING DAY IN 2008- PAY BARISTAS A HOLIDAY PREMIUM:
For some time now the IWW affiliated Starbucks Workers' Union has been campaigning to organize baristas at Starbucks to improve their atrocious working conditions. Despite its veneer of trendiness and "social responsibility" Starbucks continues to pay its employees poverty level wages, forces them to work part-time with no guaranteed hours and provides health insurance coverage to fewer of its employees than even the much criticized Wal-Mart does. The latest campaign of the Starbucks Union was announced last December 14th, with demonstrations and a press release.
The SWU has pointed out that although January 21, Martin Luther King Day, is a federal holiday in the USA Starbucks employees not only get time off but are also denied the holiday premium for working on such days that full time workers would receive. They receive this premium for working on other federal holidays such as New Year's Day and the Fourth of July but not for MLK day. Their campaign aims to pressure Starbucks to live up to their rhetoric of "diversity". So far in their campaign for higher wages, secure work schedules and respect eight SWU members have been fired by the "socially responsible" Starbucks management for their union activities, and the company has been cited by the Labor Board multiple times for illegal union-busting tactics.
The SWU has asked members of the public to participate in an email campaign directed at Starbucks urging them to pay the holiday premium this January 21. You can see this campaign and join up at http://www.starbucksunion.org/node/1919. Go to the main SWU website listed above for more ideas for solidarity actions or to read more about the union and its activities.
Posted by mollymew at 1:04 PM