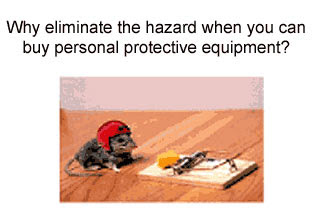 WORKPLACE SAFETY:
BLAMING THE WORKER:
No matter how difficult the task may seem human nature is inventive enough to accomplish the near impossible. In this case the task is to shift blame for workplace accidents from the employer to the employee. Here's an interesting article from Labor Notes about how bosses actually use "safety programs" to not only shift blame but also to divide the workforce such that demands for real improvements in work conditions will never be heard.
+++++++++++++++
Confronting Blame-the-Worker Safety Programs
In a Missouri food warehouse, 150 workers load and unload trucks, lift boxes, drive fork trucks, and move endless pallets. Each month that no one reports an injury, all workers receive prizes, such as $50 gift certificates. If someone reports an injury, no prizes are given that month.

Last year, management added a new element to this “safety incentive” program: if a worker reported an injury, not only would co-workers forgo monthly prizes but the injured worker had to wear a fluorescent orange vest for a week. The vest identified the worker as a safety problem, and alerted co-workers: he lost you your prizes.

Blame-the-worker programs like this are flourishing, and they are harmful for workplace health and safety. Why are employers implementing them?

For decades, employers have brought in work-restructuring programs such as Lean, Six Sigma, and kaizen/continuous improvement. The result has been understaffing, work overload, long hours, job combinations—and therefore increased stress, repetitive strain, and other injuries and illnesses.

But instead of rethinking their work restructuring, employers came up with a different plan: hide the injuries. Enter “behavior-based safety.”

KNOW THE ENEMY
Behavior-based safety programs and practices focus on worker behavior rather than on workplace hazards as the cause of injuries and illnesses:

• Injury discipline policies, where workers are threatened with or receive discipline (including termination) when they do report injuries

• Post-injury drug testing, where workers are automatically drug-tested when they report an injury

• Workplace signs that track the number of hours or days without a lost-time or recordable injury, which encourages numbers games

• Other posters, such as those stuck to washroom mirrors stating, “You are looking at the person most responsible for your safety.”

• Programs where workers observe co-workers and record their “safe behaviors” or “unsafe acts.” This focuses attention away from hazards and reinforces the myth that injuries result from bad behavior rather than hazardous conditions.

HIDING HAZARDS
In order for there to be a workplace injury or illness, there must be a hazard. A union approach to reducing injuries and illnesses is to identify, eliminate, reduce, and prevent hazards.

A behavior-based approach, on the other hand, drives both injury reporting and hazard reporting underground. When a job injury or illness is reported, the hazard causing it can be identified and addressed. If injuries aren’t reported, hazards go unaddressed—and injured workers may not get the care they need.

In addition, if a worker is trained to observe and identify fellow workers’ “unsafe acts,” he or she will report “you’re not lifting properly” rather than “the job needs to be redesigned.”

It’s hard enough to get hazards fixed that we know about; it’s impossible to fix hazards we don’t know about.

Many behavioral safety programs also harm solidarity. When workers lose prizes if a co-worker reports an injury, peer pressure comes into play. Observing co-workers is harmful even if no discipline is attached to recorded “unsafe acts.”

Employers tout low injury rates as an indicator of safety, when the reality can be disastrously different. One employer with a safety incentive program and an injury discipline policy won an award from the Massachusetts Safety Council for having zero recordable injuries; the next year a worker was crushed to death in a machine. Minor injuries had occurred on this machine but were never reported.

Behavioral safety programs hide injuries, but they can’t cover up fatalities. In 2005 BP was touting an OSHA injury rate many times below the national average at its Texas City facility, when an explosion there took the lives of 15 workers and injured 180.

TAKING THEM ON
The first step is educating members about these programs and building solidarity around the need to end them. Incentive programs that promise prizes for not reporting injuries are hazards in disguise.

Unions whose employers are covered by OSHA can use a provision in OSHA’s Recordkeeping Rule: it is an OSHA violation to discriminate against workers for exercising their right to report injuries. When workers lose prizes or receive automatic discipline for reporting injuries, this can be illegal discrimination under 29 CFR 1904.36 and Section 11(c) of the OSH Act.

One example was at Alcoa: the names of everyone who didn’t report an injury went into a hat, and periodically there was a drawing for a big screen TV. Steelworkers Local 105 filed an OSHA complaint, and OSHA made Alcoa cease and desist.

In another case, an employer called in 17 members of USW Local 880 in Massachusetts and told them they had too many injuries—one more and they were up for termination. A call to OSHA produced a call to the company informing management that this was illegal discrimination.

HOW LONG?
Unions can respond to the employer’s signs announcing how long the workplace has gone without an injury with our own signs or leaflets that track how long it takes for the employer to address a particular hazard: “It’s been 14 days since the union asked management to fix [a problem], and they still haven’t corrected it!”

Pictures of the CEO can be slipped under the mirror magnets that say, “You are looking at the person most responsible for your safety.”

Any checklist used in a behavioral observation program can be turned into its opposite: instead of recording co-workers’ “unsafe acts,” observers record only hazards: “guard missing on Machine #3,” “understaffing in the Emergency Department.”

At the food warehouse in Missouri, the members of Steelworkers Local 11-500 approved the purchase of fluorescent orange vests for every member. These vests would each bear the USW’s sticker “Fix the Hazards—Don’t Blame the Victim.” Before this solidarity action was implemented, the employer “voluntarily” discontinued its orange-vest policy.

Wonderful, Pat! I posted on the "behavioral approach" myself a while back: