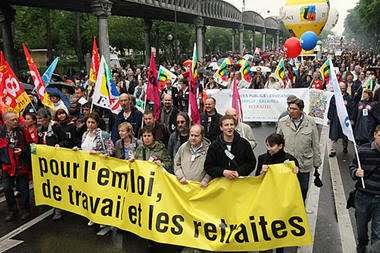 INTERNATIONAL LABOUR- FRANCE:
FRENCH WORKERS AGAINST PENSION THEFT:
Last Thursday, May 27, tens of thousands of workers struck and took to the street in response to a call from the major labour unions to oppose the proposed pension "reforms" that would raise the retirement age in France from 60 to 62 years. While large the demonstrations and the response of workers to the strike call was decidedly smaller than expected by the unions and perhaps suggests disillusionment with the endless rounds of "half-strikes" and street marches that the major unions have relied on in their continued disputes with the conservative Sarkozy government.
It might also suggest that efforts to convince the population of the "necessity" of reduction in government benefits are bearing fruit in the atmosphere of the fiscal crisis of much of southern Europe. The drive to reduce pension benefits, however, predates the present crisis and is an ongoing campaign by governments across the world to roll back pension benefits while maintaining or increasing give-aways to corporate business. With the demise of the pseudo-alternative of the state-communist countries the ruling managerial class has long seen its way open to "rationalize" the system of social support in various ways, and one of these is the reduction of pension benefits, especially by raising the age of retirement. they are aided in this by the fact that most social democratic parties worldwide have abandoned all but the slightest pretence to a "class perspective" in their policies. Either trendy leftism such as "greenishness" or self-promotion as "better managers" has become their raison d'etre. The present fiscal crisis is merely an opportunity for long term plans to be accelerated, not some unique crisis.
It should also be noted that the raising of the age of eligible retirement is a worldwide phenomenon that happens whether a state is in a deficit position or not. In Europe Germany will bring in a retirement age of 67 next year. The trend to raising the age of retirement extends across Europe and way beyond. Retirement ages are increasing outside of Europe in places such as Australia, India, Singapore and South Korea amongst many others. It should also be noted that while a retirement age of 60 (in France) may seem generous by North American standards that there are countries such as China where the age is 60 for males and 55 for females. Appeals to "competitiveness" hardly hold water when you look at the numbers in an international context.
The attack on pension benefits in France has to be seen in the context of the worldwide tendency of government managers to shift income from the working and other lower classes to the ruling classes. They do this in the context of assurance that they have no serious consequences to face beyond possible disorder ie there is presently no widely accepted "alternative" to their rule outside of South America and its neo-caudillos. The so-called fiscal "crisis" that much of Europe faces today is, from the point of view of its managers more an "opportunity" than a crisis. Watch carefully. If France's retirement age goes from 60 to 62 it will become 65 a few years after.
Meanwhile Canada's age will creep up from 65 to 67 to 69 and finally to 70. If you are so unlucky as to have health problems come upon you before then, well tough shit. The hope of government managers is that you die before you can collect a penny.
It will be a long hard slog before a popular alternative to such policies will be built, but doubtless the anarchist movement - in more realistic aspects - will be a major force in the formulation of such a thing. Until then defensive struggles to fight back against the plans of the managers have their place, but perhaps the French are right in their lack of faith in the traditional ways of doing this.
Here's an item from the Globe and Mail about the recent "semi-strike" in France.
ILILILILILILILIL
French workers hit the streets
Paris — Reuters
Published on Thursday, May. 27, 2010 9:56AM EDT


Tens of thousands of workers took to the streets in cities across France on Thursday to protest against government plans to raise the minimum retirement age of 60 as part of a reform of the costly pension system.

Trade union leaders said the marches were the first step in a long struggle to defend the retirement age, a trademark reform of the late Socialist President Francois Mitterrand, against the current government which says it has no alternative.

Transport was working almost normally and between 10 and 20 per cent of public service workers went on strike in schools, the post office and France Telecom. A poll for the Le Parisien daily said 62 per cent of those responding were ready to demonstrate.

One of the earliest marches, in Marseille, drew a larger turnout than a previous protest day in March. Unions estimated the crowd at 80,000 while police gave a figure of 12,000.

Estimates for the Paris march were due later on Thursday.

“Only a show of force on the streets can defend the 60-year retirement age and the social achievements that [President] Nicolas Sarkozy is methodically attacking,” Bernard Thibault, secretary general of the powerful CGT union, said.

Labour Minister Eric Woerth said on Wednesday that the current retirement age was “not dogma” and Budget Minister Francois Baroin said on Thursday a pension reform bill would be debated in parliament after the summer break.

“There are basically no other measures on the table that are convincing,” Mr. Woerth told reporters.

Mr. Sarkozy added a partisan sting to the debate on Wednesday by saying, to loud protests from the opposition Socialists, that France would have “much fewer problems” if Mr. Mitterrand had not lowered the retirement age in 1983.

According to a report last month by the government-appointed Pensions Advisory Council, France’s pension system faces a funding gap of around €70-billion ($86-billion U.S.) in 2030 and that could balloon to more than €100-billion by 2050.

Like other countries in the euro zone, France is struggling to bring its swollen public deficit under control. It has announced a freeze on central government spending over the next three years but has ruled out tax increases.

According to French media reports, the government is considering increasing the retirement age to 62 or 63 years and extending the period during which contributions have to be paid to 42 years from the current level of 40.5 years by 2030.

However, President Nicolas Sarkozy’s office said that no decisions had been taken as yet.

Mr. Sarkozy has singled out an overhaul of the pension system as his government’s key reform project this year but his plans already have aroused strong opposition from unions.

The CGT’s Thibault said further protests could come before the summer break. CFDT union leader Francois Chereque said: “Things will happen over time. One protest will not suffice.”

There have been expectations for several months that a rise in the retirement age would be part of the planned reform but French media have focused closely on the issue in recent days.

The transport chaos that often accompanies strikes in France was mostly absent on Thursday, partly because the reform plan would not touch costly special pension schemes for transport workers, a powerful sector that brought an earlier conservative government to its knees in 1995 when it tried to reform them.

“The government’s plan is not the toughest that could be, despite what the banners will say,” the business daily Les Echos wrote in an editorial.
Posted by mollymew at 9:09 PM

The greatest crime of all is that since the retirement age of 65 (in Canada) was set 45 years ago, the economy has more than doubled in size. Hence if 65 was OK with an economy half what we have now, reducing the retirement age even further, say 30 years labour and out, would be realistic.After all you only get 25 years for murder, surely 30 years of wage slavery is enough punishment?