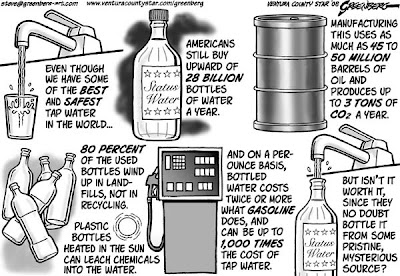 CONSUMER AFFAIRS:
BOTTLED WATER "BUGS" ME:
The world is full of scams. One only has to look at American religious TV to get examples that are so blatant that it's a wonder anybody falls for them. But most people aren't theologians. Neither are they nutritionists. The oft-quoted figure that 95% of "diets" are either ineffective or harmful is actually a "success" rate that equals the best legitimate medical diagnoses. People keep buying nonetheless. Hope springs eternal and bottomless money pits remain bottomless. One of the multitude of scams is that of bottled water, and this scam has the cachet of ersatz elitism attached to it. There are literally restaurants that offer a "selection of waters" like others offer a wine selection. Somehow the various waters are supposed to "taste different" or have some magical health benefit. Homeopathy in drag ??
Most of the bottled water on the market is actually simply tap water from somewhere else, but the very process of bottling it, storing it and shipping it elsewhere adds risks other than that to your pocket book. Here's an interesting article from the Montreal Gazette about just one of the problems, the bacteriological content of bottled waters. Now, applying that highly complex, ultra-high tech sensitive instrument known as common sense, this stands to reason. What can water shipped across a continent and stored on shelves be other than stale water, and the staler the water the more bugs it will have. It's nice, however, to see common sense verified by scientific studies. Here's the article.
BWBWBWBWBWBWBW
Bottled water worse than tap: lab
Very high bacteria count; Some brands had levels 400 times higher
By ALLISON CROSS, Canwest News Service May 26, 2010
Canadian researchers say they've discovered some bottled water in Canada contains more bacteria than what comes out of the tap - although they won't reveal which brands are the culprits.

Researchers from C-crest Laboratories in Montreal bought and tested several popular brands of bottled water, and found many of them had heterotrophic bacteria counts that were "surprisingly high."

More than 70 per cent of popular brands they tested did not meet the standards set out by the United States Pharmacopeia, a non-governmental agency that sets safety standards for medications and health-care products.

No more than 500 colony-forming units (cfu) of bacteria per millimetre should be present in drinking water, according to the USP.

"Heterotrophic bacteria counts in some of the bottles were found to be in revolting figures of (100) times more than the permitted limit," said Sonish Azam, a researcher on the study, in a news release. Some brands had as much as 70,000 cfu per millilitre - or 400 times higher than tap water - Azam said.

The average number of colony-forming units in tap water samples they tested in order to compare results was 170 per millimetre, she said.

"Despite having the cleanest tap water, a large number of urban Canadians are switching over to bottled water for their daily hydration requirements," Azam said. "The consumer assumes that since bottled water carries a price tag, it is purer and safer than most tap water."

This kind of bacteria doesn't normally cause any disease in healthy people, but could make pregnant women, infants and the elderly sick, she said.

Although researchers didn't actually find any pathogens - or germs - in the bottled water, they said the high bacteria counts mean Canadian regulations should be stricter, just in case.

According to Azam, Health Canada hasn't set an allowable limit for heterotrophic bacteria in bottled water, and neither has the U.S. Food and Drug Administration.

Their intention is to change Canadian regulations, said researcher Ali Khamessan, and not point the finger at specific companies.

Health Canada points out that bottled water is already regulated under the Food and Drugs Act and Regulations. "Under these regulations, bottled water is required to be free of disease-causing organisms. Like most foods, bottled water may contain naturally occurring bacteria which typically have little or no health significance," it said in a statement.

It contends that a recent World Health Organization study concluded "heterotrophic bacteria counts in drinking water are not a health concern to the general public."

Researchers presented their results yesterday at the general meeting of the American Society for Microbiology in San Diego.

Consumer Reports did some reviews of bottled water years ago. Their standard of excellence against which everything was measured? ... New York City tap water which until recently was the cleanest in the world. Some of their main lines are 600 feet down piping water from the Catskills so pure that it doesn`t need filtering. Check this item from the VOA.

Good post. I learn something new and challenging on blogs I stumbleupon everyday.
It's always interesting to read content from other writers and practice a little something from their sites.
Also see my webpage :: http://www.customnfljerseysvip.com/

Sweet blog! I found it while browsing on Yahoo News.
Do you have any tips on how to get listed in Yahoo News?
I've been trying for a while but I never seem to get there! Thank you
My website ... nfl jerseys outlet

Normally I do not learn post on blogs, however I would like to say that this write-up very compelled me to try and do so!

Your writing style has been amazed me. Thank you, very great article.

Excellent web site you have got here.. It's difficult to find high quality writing like yours nowadays. I really appreciate individuals like you! Take care!!

I am sure this post has touched all the internet viewers, its really really nice
piece of writing on building up new weblog.

Do you have any video of that? I'd like to find out more details.