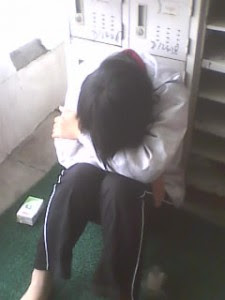 INTERNATIONAL LABOUR- CHINA:
THE DARK SIDE OF THE I-PAD:

Today Apple launched its I-Pad in Canada, Great Britain and 7 other countries. Much as I might have liked to miss the news of people lining up overnight at stores to be the first kid on the block to own the new toy it was inescapable on the radio as I drove around from place to place during work. Now I have to admit that my first impulse was, "what the hell use could this thing have" given the ever-expanding glut of electronic gadgets on the market.

This little item, however, has a more serious and darker side beyond frivolity, and this is connected to yet another news story that I heard a few days ago. Over in Longua in China the Foxconn Company has what may perhaps be the most bizarre demand that an employer has ever made of their workers. Before obtaining employment at their plant Foxconn demands that potential workers sign a "no-suicide" promise saying that they will not kill themselves while working for the company. The reason is that suicide has become quite an epidemic in Longua and Foxconn's other plant in Shenzhen. Since January 10 workers, driven to the wall by brutal working (and living-they live 12 to a room in company dormitories) have taken a do-it-yourself pink slip by killing themselves. Foxconn has responded by a number of steps, similar to the way management across the world blames the worker rather than the conditions. Some are, however, rather unique...'hiring monks to teach the workers to meditate' and literally "installing nets around dormitories to catch jumpers". Much more on what is happening there can be seen in this article from the respected business magazine Forbes, hardly a hotbed of raving leftist radicals.

Now the plot thickens. Foxconn is the source for a number of products for electronics giants such as Sony, Dell, Nokia, Nintendo, Ericsson, Motorola and Hewitt Packard. And, of course, Apple. The trendy I-Pad's seamy underbelly is the brutal working conditions endured by Foxconn employees. Think about that as you line up for the latest in thing.

Some are trying to do something about this. Here's a item from the Maquila Solidarity Network asking for your support for the Foxconn workers. Sign up with your new I-Pad if you have to.
CLCLCLCLCLCLCL
How many more workers have to die at this Ipad factory before Apple takes action?‏


As consumers rush to get their hands on a new iPad, Apple Inc.’s latest gadget, which officially hit Canadian stores today, Asian civil society organizations are protesting Foxconn, the world’s leading electronics manufacturer and one of Apple’s major suppliers, for its deplorable labour practices which have been linked to 12 worker suicides at one of its Chinese plants this year alone.


Foxconn has responded by setting up nets around the factories dormitories and buildings, bringing in mental health experts, and asking workers to contractually agree not to commit suicide and to report colleagues who appear to be undergoing distress. Unfortunately, this ‘blame the victim’ approach treats the suicides as an individualized problem of the workers themselves and de-emphasizes the role that workplace practices played in the deaths.


As Apple launches its 4th generation iPhone on June 8, Asian labour rights groups are calling for this date to become a Global Day of Remembrance for the Victims of Foxconn. They are demanding that Foxconn shut down production for a month (with full pay) in order to thoroughly investigate the underlying systemic workplace issues and management systems linked to the suicides. They are also asking Foxconn to facilitate the establishment of democratic worker organizations in the factory, so that workers can overcome their isolation and bring problems to management’s attention in a collective manner.


In order to pressure the company, Asian civil society groups are calling on consumers to boycott the products made by Foxconn, including iPhones, and iPads, throughout the month of June.


International electronics brands that source from Foxconn, including Apple Inc, Dell, Hewlett-Packard, Nokia, and Motorola, must also be pressured to take responsibility for investigating any labour abuses occurring in their supply chains.

to sign a petition initiated by Students & Scholars Against Corporate Misbehavior (SACOM), a leading Asian labour rights organization, in support of Foxconn workers and to demand that the causes of these tragic deaths are investigated and addressed.

--
Maquila Solidarity Network
606 Shaw St.
Toronto, ON M6G 3L6
Canada
416 532-8584
CLCLCLCLCLCLCL
THE PETITION:
Please go to this link to sign a petition in support of the Foxconn workers and also to learn more about the International day of Remembrance on June 8 for the victims of Foxconn. Also, for another take on what lays behind our cheap electronics go to this article from la Revue Gauche out of Edmonton.
Posted by mollymew at 6:04 PM