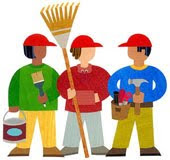 Nine people from a CUPE local were camped out Monday in a recreational vehicle outside the Fredericton Inn and vowed to not eat for five days.

Local president Sandy Harding said they're looking for fairness and respect from the province.

Harding said the average employee works 28 hours a week for an average salary of $17,000 a year.

She said most employees also don't have a defined benefits pension plan.

"We felt doing a hunger strike would show the seriousness of the situation, and what this team is willing to do to make the government take notice," said Harding, who was joined by the CUPE negotiating team on the hunger strike.

"We need a collective agreement and we need something that is fair."

She said the group will be camping out in a recreational vehicle in front of the Fredericton Inn, and is prepared to go without food until Friday.

"We are hungry for fairness and respect," Harding said. "We felt doing a hunger strike would show the seriousness of the situation, and what this team is willing to do to make the government take notice.

"We need a collective agreement, and we need something that is fair."

She said the union, which includes teacher and library assistants, school intervention workers, district and school administrative support staff and student attendants, has several issues with its contracts.

"We don't have a defined benefit pension plan for all members; only about 10 per cent of members are qualified to pay in."

Harding said she was pleased with the reaction of passing motorists, as union members held up signs and waved at Regent Street traffic.

"We've gotten a lot of public support," she said. "As people drive by, they're honking and they're stopping in. We're also collecting food for the food bank, and a lot of people have contributed. It's been going really well."

A.J. Savoie, a custodian with School District 6, said he isn't a CUPE 2745 member, but he supports the group's cause.

He joined picketers outside the Fredericton Inn on Monday afternoon, and said he was pleased to participate in the effort.

"These workers need full-time hours to be able to focus on students," Savoie said. "Teacher assistants and support staff are very important, and they should get the hours and fairness and respect that they deserve."

He said giving education support workers more hours would be beneficial for the province.

"We've got to fight for this. What's happening is not right."

Harding said the team was keeping hydrated and hunger hadn't started to set in Monday. She said the days ahead may be difficult, but it will be worthwhile if the hunger strike incites a response.

"We're confident we can go five days," she said. "Hopefully, it will get a reaction from the government when they see we're willing to go to these lengths to get a collective agreement. They know what the issues are with regard to our group. They need to step up to the plate and say they're willing to help with this."

She said union members who weren't directly involved in the hunger strike were supporting the initiative in other ways, such as fasting for a day or by collecting donations for food banks.

A spokesman for the Department of Human Resources said Friday he was unable to discuss any details as the matter is still on the table.
Posted by mollymew at 8:35 PM