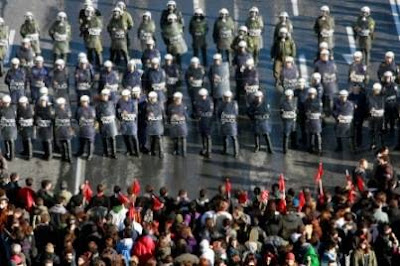 ANARCHIST STATEMENT ON THE EVENTS IN GREECE:

The Greek crisis continues to make news every single day, particularly because it raises the spectre of 'sovereign default' on the part of other European countries such as Portugal, Spain, Italy , Ireland and even Great Britain. Such an event would be beyond the capacity of the EC (or the world for that matter) to patch up, and could easily lead to the end of the EU with all the unknown consequences of same, let alone its effect outside of Europe. While other events such as the Icelandic volcano and the Gulf of Mexico oil spill have contributed to nervousness in world markets there is little doubt that the events in Greece are the major influence on recent market volatility.

Is there a reason to be nervous ? Certainly if one simply takes the potential for sovereign default as 'Financial Crisis Version 2.1' there is indeed. A domino cascade of sovereign defaults would be basically unstoppable and would provoke a far greater crisis than the one we are gradually emerging from. Is there reason for the ruling class to be nervous and their opponents to be hopeful about an effective opposition emerging from the present crisis ? Personally I doubt it. On our sister blog Molly's Polls I gave (sneakily) several reasons about why a revolution in Greece is improbable. I stand by these items no matter how dramatic present events may seem.

It may be hard for some amongst the crazier fringes of anarchism in the USA to understand the difference between revolution and mindless rebellion, but most other people in the world ( including pretty well all responsible anarchists outside of the primitivist, post leftist cult)understand it very well. In revolution you don't firebomb banks and run like hell. You take over the building, destroy the records of debts and turn the building to good use whatever that may be. Perhaps the bank workers try and devise new accounting systems for a new society. can you begin to comprehend how far away from such an eventuality Greece is ?

Events in Greece have hardly progressed beyond what I personally envisioned as the "maximum extent of rebellion". That is "rebellion" not revolution or even a prelude to the latter. Why do I say this ? Let's take some well accepted "necessities" that define a pre-revolutionary state.

1)The ruling class can no longer operate in its usual fashion. This condition at least is fulfilled in Greece. Bankruptcy is bankruptcy. This does not, however, mean that the plan (read conspiracy) of the EU and the IMF cannot at least salvage something for the local Greek ruling class and, more importantly, international finance that holds Greek debt. It is entirely within the realm of possibility that the bailout plan can work albeit with all the victimization of ordinary people that the following statement points out.

2)The ruling class is divided. You have to search pretty thoroughly to find evidence of this. Yes, the main conservative opposition party in Greece voted against the austerity measures, but this is an obvious rhetorical devise on their part, and I have a hard time believing that anyone takes their "opposition" seriously. They, after all, laid the basis for the present crisis by their fraudulent national accounting, and I'm pretty sure that the average Greek is more than sufficiently aware of this just as the rest of the world is. When the vote came up in the Greek Parliament only three socialist PASOK deputies voted with their conscience against the austerity measures. Try to understand that in most modern societies the "left" is very much just another aspect of the ruling class (most obviously in the USA ). If there will be a division amongst the Greek ruling class it will appear first amongst the so-called 'socialists". There is little evidence of such desertion to the "other side" at this time. Perhaps the vast, vast, vast majority of "socialist" bureaucrats are making very rational calculations about the general mood in Greece today. ot perhaps you'd like to believe ultraleft groupuscles instead.

3)The population can no longer live in the present conditions. Actually in Greece the population is rebelling against a set of circumstances that has yet to be implemented. For the vast majority of the people who have come out into the streets the issue is not their present conditions but rather what they will be in the future if the government's policies are implemented. It's a basically conservative response (nothing wrong with that by the way), but the population is still very far from being driven against the wall by an unendurable situation. The people in other countries have been the unfortunate subjects of even more brutal readjustments and revolution has not been the results, even if, as in the case of Argentina great advances in terms of libertarian ways of organization have happened. The Greek people can love with what the ruling class is planning for them, however vicious it may be, and I think they are likely to realize this and not toss caution to the winds in the end.

4)The opposition is united, at least in terms of getting rid of the present regime. This is where the present Greek situation is most deficient in terms of the preconditions for revolution. As I mentioned before the general reasons for the present protests are not to remove a regime but rather to keep a certain system of benefits in place. No doubt the more clear sighted of the anarchists (excluding the insurrectionists who have no program beyond- more violence ) have a vague idea of a society that is different from our present one, but it has hardly been expressed at least in "mass terms" beyond vague generalities. No doubt the Coalition of the Radical Left also have vague proposals for an alternative society (with all the corrupting and futile statism that such a party can muster ). In such a vague cloud the conservative aspects of the movement come to the fore...as they actually have if one examines the numbers in the news from Greece dispassionately without revolutionary illusions. Here you will see a horrible and obvious fact. the various factions of the Greek left not only, in the majority, don't want an alternative society but they abhor each other with a deep passion. Various union centrals make great efforts to stay separate from others in their demonstrations. I am speaking here of the major players in the present Greek drama, not the separation of all of them from the anarchists. To say the least this is not the way to proceed.

5)Finally a "revolution" as opposed to a revolt presupposes a vision of society ie a goal that is sufficiently diffused amongst the general population such that they see it as both worthwhile and possible. Sometimes these goals can be pretty limited ie the end of communist rule in eastern Europe. When a clear alternative, however, is not present it is the responsibility of "revolutionaries" to present such alternatives over the course of how many decades they may take to seek into popular consciousness. The most common goal of the present Greek rebellion is not a new and different society, as I have mentioned above. It is merely a defensive action against an "adjustment" that will remove benefits from ordinary Greeks. Good luck to them, even if I think the effort is doomed.

In any case here is a perfectly rational statement from various international anarchist groups in support of Greek workers. I agree with its statements of fact and its call to action even if I am very much a pessimist as to the conclusion of this struggle.
Solidarity with the Greek workers' struggle!
Statement on the Greek crisis

The Greek working class is angry, and with good reason, with the attempt to load responsibility for the bankruptcy of the Greek State onto their shoulders. We maintain instead that it is the international financial institutions and the European Union who are responsible. The financial institutions have plunged the world, and Greece in particular, into an economic and social crisis of historical proportions, forcing countries into debt, and now these same institutions are complaining that certain States risk not being able to repay their debts. We denounce this hypocrisy and say that even if Greece - and all the other countries - can repay the debt, they should not do so: it is up to those responsible for the crisis - the financial institutions, not the - to pay for the damage caused by this crisis. The Greek workers are right to refuse to pay back their country's debt. We refuse to pay for their crisis!

Instead, let us shift the capitalists into the firing line: Greek capital generates some of the biggest profit margins in Europe due to its investments in the poorer Balkan countries, the absence of social protections, collective guarantees and a minimum wage for Greek workers, not to mention the country's gigantic black economy in labour and an even greater exploitation of immigrant work. Greek capital is also very lightly taxed, due to the weakness of the State (with regard to the rich) and major corruption which permits fraud and tax evasion on a massive scale. So it is equally up to Greek capitalists to pay for this crisis.

We also denounce the attitude of the European Union. The EU was presented to us as a supposed guarantee of peace and solidarity between the peoples, but now it is showing its true face - that of acting as an unconditional prop for neoliberalism, in a complete denial of the notion of democracy. As soon as an economy becomes mired in difficulties, all pretence of solidarity evaporates. So we see Greece being scolded and accused of laxity, with insulting language bordering on racism. The "Europe which protects us" that liberals and social-democrats extolled at the time of the scandalous forced adoption of the Lisbon Treaty (particularly in France and Ireland) now seems a long way away.

As far as actual protection goes, the EU and the financial institutions have combined their efforts to frog-march Greece towards the forced dismantling of public services, through austerity plans that recall the "Structural Adjustment Plans" of the IMF: the non-replacement of staff, wage freezes, privatisations and VAT increases. Today the EU is demanding that the retirement age be moved back to 67, not only in Greece but also in other countries, and is also threatening to dismantle the social welfare system. In this way they are opening new markets for investors, while guaranteeing the assets of rich investors, to the detriment of the basic interests of the working class. It is a Europe of the ruling class, and one which we must all work together to oppose.

This is why we call for participation throughout Europe in solidarity initiatives with the Greek working class and with future victims of the onslaught of the banks.

Against the values of greed and rapacity that the European Union is based on, let us respond with class solidarity! Greece is a test case for the social dismantling that awaits us all. This policy is being enacted by all the institutional parties, from out-and-out bourgeois to liberals and social democrats, by every government and by all of globalised capitalism's institutions. There is only one way to hold back this policy of barbaric capitalism: popular direct action, to widen the strike movement and increase the number of demonstrations all across Europe.
Solidarity with the Greek workers' struggle!

I agree with your statement on the potential for revolution in Greece. Key factors are missing.

Thanks Renegade,
I've seen the item you refer to, and it defintely deserves comment, as do some more recent statements. Larry has mentiond this over at his blog as well. Hopefully I'll be able to put something together.