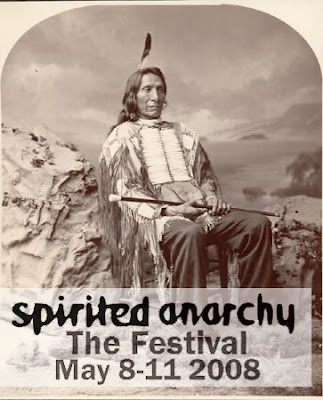 WINNIPEG:
IT'S HERE:
IT'S NOW:
IT'S THE SPIRITED ANARCHY FESTIVAL AND BOOKFAIR:
Well Winnipeg has finally done it. The Spirited Anarchy Festival and Bookfair is up and running as of yesterday. The schedule is posted below. For further details contact the website above.
...................................
SCHEDULE
Thursday May 8th
*6 - 8pm – Snapshots of Anarchist History: A Panel on Historical Aspects of Anarchism in a Canadian Context
Mondragon Bookstore & Coffeehouse (91 Albert St.)
Travis Tomchuk on “Europe is No Place for an Anarchist: The Network to Aid Italian Anarchists After the Spanish Civil War.”
Paul Burrows on “Anarchism, Colonialism, & Aboriginal Dispossession in the Canadian West.”
*8 - 9:30pm – Lecture and Discussion on 40th anniversary of Paris 1968 Uprising
Rudolph Rocker Cultural Centre ( 4th fl. 91 Albert st.)
Presented by Winnpeg New Socialist Group and the Industrial Workers of the World (IWW)
*9:30 – 10:45pm - Film Screening: Rene Viénet’s "Can Dialectics Break Bricks?" (1973)
Rudolph Rocker Cultural Centre ( 4th fl. 91 Albert st.)
“Imagine a kung fu flick in which the martial artists spout Situationist aphorisms about conquering alienation while decadent bureaucrats ply the ironies of a stalled revolution. This is what you’ll encounter in René Viénet’s’s outrageous refashioning of a Chinese fisticuff film. An influential Situationist, Viénet’s stripped the soundtrack from a run-of-the-mill Hong Kong export and lathered on his own devastating dialogue. .. A brilliant, acerbic and riotous critique of the failure of socialism in which the martial artists counter ideological blows with theoretical thrusts from Debord, Reich and others... Viénet’s’s target is also the mechanism of cinema and how it serves ideology.” - Program note
*10:45pm–late -Party! Bike! Partybike!
Meet outside at 91 Albert st.
Beach Party theme. That means speedos, grass skirts and swimming in the river. No kidding. Ok, only half kidding.

*5:15 – 5:45 pm – Assassins Game Sign-up & Explanation
Emma Goldman Grassroots Centre ( 2nd Fl. 91 Albert st.)
Explanation of assassins role playing game to be played over course of weekend. Please attend or get the information if you would like to participate in this game. Game-play occurs at all hours and in all places. Since an assassination attempt could occur at any time, successful players are obligated to develop a healthy degree of watchful paranoia. Just like in real life! 3 cheers for security culture!
*5:45 - 7:30pm – Film Screenings "Five Ring Circus" & local short film “Liberation Frequency”
Mondragon Bookstore & Coffeehouse (91 Albert st.)
The "Five Ring Circus" exposes a side to the Vancouver Olympics which has not been revealed before. This film shows how this three week event is changing Vancouver forever. Find out what mayors, activists and residents think of the 2010 Olympic games. With three years to go before the games, this documentary examines how the commitments to environmental, social and economic sustainability have not been kept and how the preparations for the games are affecting diverse communities. Is Vancouver getting into the spirit of the Olympics? This independent documentary promises to be controversial.

*7:30- 9 pm – Anna Hunter of APC Vancouver discusses anti-Olympics 2010 organizing
Mondragon Bookstore & Coffeehouse (91 Albert St.)
Anna Hunter is a Vancouver based anti-poverty activist who organizes with the Anti-Poverty Committee (APC). The APC is a direct action based anti-capitalist, anti-colonial organization committed to fighting for poor people's rights, housing, against police violence and state imposed poverty.
The APC has been involved in a campaign against the 2010 Winter Olympics and has targeted those involved in the push on poor people in the Downtown Eastside, the theft of indigenous land and the corporations who will profit off the 2010 Games.
Anna will discuss the actions that have been taken since Vancouver won the Olympic bid in 2003 and the mobilization that is planned across the country and the continent for the 2010 Games.
*9 pm- late - Rock for Rights Show – Suggested donation of $5
Rudolf Rocker Cultural Centre (4th Fl. 91 Albert st.)
w/ Ian La Rue & The Condor, 1919 Insurrectionary Orchestra, Kronstadt 21, + Guests

*10 - 6pm – Winnipeg Anarchist Bookfair & Workshops/Discussions
see bookfair section for more info.
Old Market Square, in the Exchange District (Unless noted otherwise)
Food Not Bombs will be serving food for free all day on Albert St.
The Peoples' Market - There's nothing better than free swag - except maybe zines, cold yeasty beverages in the sun, good music, laughing, the smell of cooking cookies, ok the list goes on and on, but swag is still good and what's old to you is new to someone else, so be sure to take in the People's Market (aka stuff swap aka giant freebox). De-clutter your life by bringing in your old (but clean) stuff and maybe you can swap it for something sweet. Even if you have nothing to offer you can snag some nice things!
Workshops:See workshops section for workshop descriptions & facilitator bios
Bookfair Vendors;
From outta town;
AK Press (books, zines, video, and apparel from Oakland, CA and Edinburgh)
Turning the Tide Bookstore (Saskatoon),
Black Cat Press (Edmonton),
Thoughtcrime Ink (zines and apparel from Edmonton),
I.W.W. (Edmonton)
From Winnipeg:
Fernwood Books,
Arbeiter Ring Publishing,
G7 Welcoming Committee,
Mondragon Bookstore,
Winnipeg Indymedia,
I.W.W. (Industrial Workers of the World),
Winnipeg Copwatch,
ABC (Anarchist Black Cross) distro
Junto Local 91 Radical Library,
The Hammer of Justice Crushes You zine distro,
War on Music worker collective,
Ragpickers Anti-Fashion Emporium & Books,
Red River Books,
New Socialist Group,
Candor Books,
Books Internationale,
Molly Mew Distro, (yeah team)
Highbrow Books,
Bay Rare Books,
Velocipide Distro

*7- 8pm – Manhunt (sic)
Urban tag game in downtown core- meet at the A-zone (91 Albert st.)
*9 pm- late - Autonomous Zone Fundraiser Party: Carnival Against Capitalism! No Gods, No (Ring)Masters! Suggested donation of $7
91 Albert st. (the A-Zone Building) will be opening all of its floors for a building-wide carnival against capitalism in a fundraising effort to get out from under the crushing jackboot of $50000 debt.
Bands in the Rudolf Rocker; Perse, Half Mast, Sortie Real, Post-Jam Clearance Initiative
Bands in the Mondragon; Tandem, Magnificent 2/7ths (Matt & Chris) plus clownarchy, fire eating, carnival games & snacks, and karaoke! Leave your dignity at home folks!

*11 - 3pm – Mother's Day Brunch
Mondragon Bookstore & Coffeehouse (91 Albert st.)
Bring mum to the Mondragon Coffeehouse for brunch on this day that's all about her. Or leave her at home in the garden and bring your own sweet self.
*12 Noon – whenever - Anarchist Soccer
Location: Soccer field @ West Broadway Community Centre (just off Broadway and Young)
Anarchists Vs Lesbians deathmatch for subcultural high-ground. Losers will convert to identity politics of victors. The Spence Action House CHUDS are threatening to bring out their trebuchet and the water balloons. Family fun in the adjacent park.
*2-3:30pm – Self-Defense Workshop pt. II
West Broadway Community Centre (just south of Broadway and Young)

*3:30pm - Tall-bike Jousting (or, radical alternatives to the Consensus process).
West Broadway Community Centre (just south of Broadway and Young)
We say any decision worth being made can be decided by thrusting a helmet and a jousting pole at someone then riding full-throttle at them on a very tall bike.
*9 pm – Wolseley Obstacle Course
Meet at Cousins Deli (Wolseley and Sherbrook St.)
Posted by mollymew at 7:30 AM

Good show! Will be looking forward to your reports on the events...

I was thinking about coming to Winnipeg for this but work got in the way. Some other time perhaps