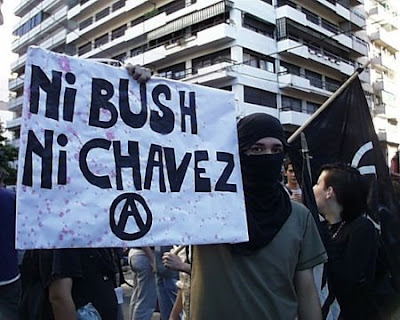 VENEZUELA:
EXPOSING THE LIES OF THE CHAVEZ REGIME:
With the continued disintegration of state socialism, whether it be Leninist or social democratic, its advocates have been forced to borrow/steal wholesale from the "toolkit" of libertarian socialism. Few outside of the most doctrinaire communists promote simple nationalization as a solution to anything nowadays. Even when promoting such policies- which serve their own class interests as a would-be new ruling class controlling/owning such property- they are almost invariably obliged to cover their tracks with cant about "self-management", "cooperatives" or "co-management". All of these attempts to obscure the truth of their desire to rule are rather threadbare in countries where communist or social democratic parties have already had their historical "kick-at-the-can", but they still manage to have some currency in countries where the population has yet to see the reality in action and amongst leftists in other countries who have a "grass is always greener" approach to anything and everything which appears (at least temporarily) to oppose the American Empire. The longest standing example of this here in North America is "Cuba Worship", and this form of transferred patriotism can take some very bizarre forms. I've witnessed it myself in watching lefties trumpet the virtues of Cuba's medical system as so much better than ours here in Canada while at exactly the same time trying their hand out at charity solicitation by raising money to send medical basics such as fluids, syringes, catheters, etc. (goods often past their expiry date) down to help the Cubans. Ah...the whole idea of "one or the other", either "so much better" or "near to collapse" cannot cross their minds because they are trapped in an ideological fantasy world. But there have been a new series of Third World Heroes to worship recently. These gradually lose their lustre. One hardly hears a squeak of approval nowadays, where there used to be roars, about Lula's government in Brazil. The trouble is that the North American left seems permanently unable to learn from its previous embarrassments.
The latest white knight on the jousting field is the Chavez government in Venezuela. The following article is originally from El Libertario, an anarchist publication "on the ground" in Venezuela. I reprint this from a version found at the Anarkismo site.
...........................................
Memories of “Popular Power” in Venezuela’s Economy
by El Libertario, Venezuela Friday, May 23 2008,
* From false co-management and cooperatives to the deceitful EPS, we present a balance of what has happened in Venezuela after at least 7 years of pretending to build a socialist economy, where the available data and verifiable facts belie the failure of the Chavez administration.