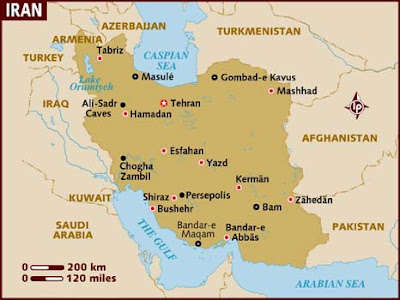 INTERNATIONAL LABOUR IRAN:
ANOTHER ATTACK ON BUS WORKERS UNIONISTS IN TEHRAN:
The following story originally came from the International Transport Workers Federation. It came to Molly's attention via the Justice For Iranian Workers website.
☼►☼►☼►☼►☼►☼►
Another attack on Vahed Syndicate members

The ITF has received news of yet another thuggish assault and detention of Vahed Syndicate members by Iranian police/security forces.

According to the ITF the attack took place on Wednesday in a Karaj internet café. Saeed Torabian, publicity director of the bus workers’ union – who has previously been arrested and then released following international protests – was with fellow trade unionist Gholamreza Gholamhosseini. Gholamhosseini was released on bail from Evin Prison two years ago, after being arrested while attending a Women’s Day event.

Shortly after their arrival six men entered and beat them up, yelling that they were thieves. They were then dragged out and taken to prison. After being interrogated, threatened and roughed up, Saeed Torabian was released on bail, but as yet nothing is known about Gholamreza Gholamhosseini – except that he is still being held.

The ITF considers these ‘arrests’ to be the latest in an ongoing campaign to break the Vahed union and notes that once again trumped up charges, threats and violence have been used to stifle normal, lawful trade union activity.

Since 2006 assassins have openly stalked Iranian military and government officials. Iranians are bombarded by disinformation by the BBC. NATO stimulates dissent over legitimacy of the government and a Twitter Revolution is reported financed by the CIA.
Reading the headlines of the long-awaited murder of Iranians to accompany that of their neighbours - and knowing the history of academics, unions, medical staff, and learned professionals of all kinds being killed or driven from Iraq...an news from Iran is suspect in my mind.
The suffering is real. The perpetrators, however, are often foreigners or those influenced by them. Nor are things on an even keel in the administration.
The nation has suffered economic warfare for decades.
I suggest that I, at least, know no way to distinguish home-grown problems from those inflicted from afar with malice and organization.

Hi Opit,
Thank you for your comment. I think you have posted here before, though I may be wrong about this. In any case I felt it incumbent on me to look you up rather than replying in a relexive manner. I'm glad I did, as my first thought was that you were some sort of mindless leftist.

To say the least I was wrong, even though I think you could find very compatible opinions on this matter if you were to visit various Maoist and right wing Trotskyist sites. What I see you as, however, is as an independently minded right winger with, unfortunately, a weakness for both health food quackery and conspiracy theory. If I have miscast you I beg you to enlighten me.

Good for you as you are part of "the right" that occasionally intersects with "the left". I'm sure you can get my own general ideological drift from my postings here, even though I more than once have had difficulty explaining how libertarian socialism is different fromn the usual statist socialism of public perception (to critics from the right) or how one should maintain an independent viewpoint in terms of international or domestic politics (to critics of the "left").

What is the problem with your viewpoint ? I think that you jump to conclusions without actually investigating the facts. To give an example I take your uncritical promotion of "cold fusion" in your postings. Though the continued linking to anti-vaccination sites could serve just as well even if the errors are not as glaringly obvious. I quote:

I always thought that it was standard to learn what the periodic table means in order to pass Grade 10. Maybe I'm wrong as I am probably older than you and education may have degenerated severely in the ensueing decades. Four atoms of Deuterium would form - not helium- but an atom of Beryllium, and an unstable radioactive isotope at that. Be 12 has a half life of 21.43 microseconds !! and decays via electron and neutron release. It is simply mathematicaaly impossible for ANY combination of 4 protons and 8 neutrons to result in ANY combination of 2 protons and 2 neutrons. The helium isotope 2P/4N is also non-existent as a stable isotope. natural helium is 2P/2N.

I've gone on about this because it is something I am quite familiar with, having been a chemist in my youth. I think it is a signpost for the need for you to check your sources a bit more carefully as it would have been easy for an educated layman to spot the error here.

Now let's go back to the politics here. No doubt the present American adminstration has little love for the present Iranian regime. This, however, may be totally different in the future as America withdraws from Afghanistan with its tail between its legs and looks for something more stable than Pakistan to guarantee its interests there. America is, after all, more than happy to tolerate and even embrace the regime in Saudi Arabia which makes the Iranians look like the Netherlands in comparison and which produces and encourages terrorist attacks via its support for its own insane clerics (something Iran actually does very little of).

All this gets down to how we view the world. I have a different viewpoint than you do. I CERTAINLY don't think there is any conspiracy to bury "cold fusion". neither do I think that there is any great medical conspiracy to hide ill effects of vaccination such that one shouldn't have one's children vaccinated. More importantly to the matter at hand I am SURE that the opponents of the Iranian regime are exactly what they say they are ie democratic and leftist opponents. I am pretty well convinced that the unionists that I have spent so much time defending on this blog are hardly in agreement with anarchism. It is almost certain that they are various shades of communist.