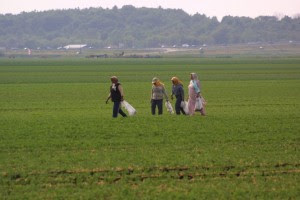 An agency of the United Nations has ruled a ban on farm unions violates the human rights of Ontario’s 100,000 migrant and domestic farm workers

GENEVA, November 18, 2010 – The UN’s International Labour Organization (ILO) has ruled that Canada and Ontario, through Ontario’s ban on farm unions, violate the human rights of the more than 100,000 migrant and domestic agriculture workers in that province. It follows a complaint filed in March 2009 by UFCW Canada — the country’s largest private-sector union and a leading advocate for farm workers’ rights for over two decades. The ILO is the UN agency responsible for formulating international labour standards including basic labour rights.

“The ILO has sent a clear message to the Canadian and Ontario governments that Ontario must end its blatant abuse of the rights of the workers who grow and harvest our food,” says Wayne Hanley, the national president of UFCW Canada. “These are farm workers, not farm animals, and people have human rights including the right to collective bargaining.”

The ILO ruling was handed down in Geneva. It found that Ontario’s Agricultural Employees Act, 2002 (AEPA)which denies all Ontario agriculture workers the right to join a union and engage in collective bargaining is a violation of human rights under two United Nation’s conventions: Convention No. 87 – Freedom of Association and Protection of the Right to Organize, and Convention No. 98 – Right to Organize and Collective Bargaining.

Canada is a signatory to Convention 87 and supported Convention 98, “so you would expect a federal government that bid to get on the UN Security Council would have the integrity to follow up on the UN conventions,” said the UFCW Canada president. “The feds can say it’s a provincial matter but the reality is that both the Harper and McGuinty governments are partners with the farm lobby in plowing under the human rights of people doing some of the hardest and most dangerous work there is.”

The ILO ruling reinforces a November 17, 2008 Ontario Court of Appeal ruling that found the AEPA violated Canada’s Charter of Rights and Freedoms by denying Ontario farm workers their freedom of association. The Ontario government appealed that decision to the Supreme Court of Canada which has twice before upheld the Charter guarantee of collective bargaining rights. The Supreme Court heard the appeal in December 2009 and its final and definitive ruling is pending.

“While Ontario continues to stall by using the courts, the lives of the workers continue to be at risk,” says Hanley. “Without labour rights, Ontario farm workers remain powerless when faced with abusive employers and dangerous working conditions. The Ontario courts have said it. The Supreme Court has said it, and now the United Nations has said it. Labour rights are human rights, and that must include Ontario farm workers.”