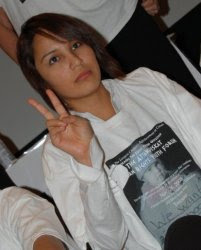 CANADIAN POLITICS:
SHANNEN'S DREAM:
For far too long Canada's aboriginal population has endured substandard conditions in their schools. A young woman, Shannen Koostachin , tried to change that. Since her untimely death others have taken up her torch. The following appeal to keep her dream alive come from the online news service Public Values.
☼☼☼☼☼☼☼☼☼☼☼☼

Youth are challenged to take up 'Shannen's Dream'

Shannen Koostachin was a young Aboriginal activist who campaigned for more equitable funding and better conditions for First Nations' schools before she died tragically last May. She was just 15 years old, but she had already established herself among First Nations, social justice and trade union activists as a powerful young fighter for truth and justice.

Now educators are taking the lead in throwing support and funds behind a campaign to have students across Canada take up her challenge.

"Shannen's advocacy helped us see very clearly the impact of underfunding by the federal government on schools in First Nations communities," said Elementary Teachers' Federation of Ontario (ETFO) President Sam Hammond. "We're challenging teachers and students in elementary schools to support the Shannen's Dream campaign to ensure that every young Canadian — no matter where they live — realizes the same fundamental right to decent schools and education in order to reach their full potential."

The campaign, initiated by MP Charlie Angus (NDP-Timmins-James Bay), was formally launched on November 17th in Ottawa. Earlier this fall, Angus introduced Motion 571 "Shannen's Dream" in the House of Commons. It calls for the right of First Nations children to high-quality, culturally relevant education, transparency in school construction, maintenance and replacement, and funding that will put reserve schools on par with non-reserve provincial schools.

"Shannen was tireless in her fight for equitable school rights for First Nation children," said Angus (Timmins-James Bay) in calling on the House of Commons to push to finally act on this national disgrace. "She became the face of a generation of forgotten First Nation school children. We are carrying on the work she started so that other children will not be left behind."

"Because of its fiduciary responsibilities under the Indian Act, the Department of Indian Affairs is functioning as a school board," said ETFO's Hammond. "How then can the Department justify that funding for Aboriginal students is $2,000 less than that for students in the provincially funded public and Catholic systems? In the case of Attawapiskat, it is unacceptable that the community has waited over 10 years for the Department to build a new school there, despite protests from First Nations and many others including ETFO."

ETFO and the Ontario Secondary School Teachers (OSSTF) is among the organizations that have donated to the Shannen's Dream campaign to help develop short videos, posters and other materials that will encourage students across Canada and others to call for an end to underfunding of First Nations schools. The campaign has also set up a scholarship to support education projects and scholarships for youth from the isolated James Bay coast.

Shannen Koostachin began her campaign because she and her classmates were forced to attend school in portables because her school was sitting on a toxic brownfield. There is still no new school despite a promise by the Federal Government in 2009 to build one. Since Shannen died in car accident last spring, Angus and others have worked to keep Shannen's Dream alive.

"Shannen was an inspiring young woman who has been recognized nationally and internationally for her human rights work for education," said Angus. "I am amazed at how many people are coming forward to make her legacy a reality."

Donations may be sent to: First Nations Child and Family Caring Society of Canada, 302-251 Bank Street Ottawa, ON K2P 1X3. Cheques should be made out to "Shannen’s Dream Campaign"
Posted by mollymew at 9:47 AM