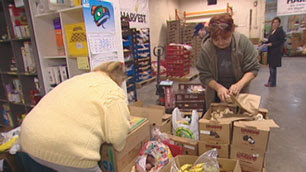 CANADIAN POLITICS:
FOOD BANK USE SURGES IN CANADA:
The following article from the online news service Straight Goods reports a shocking increase in food bank usage across the country in 2010. You can read the full report from Food Banks Canada here. All numbers in the following article are taken from this report. This has particular resonance for the province of Manitoba because, as another article from the CBC points out this province "led" (if you can call it that) all the other provinces in the increase of traffic at food banks. The Canadian average is 9.2%. Manitoba weighs in at 21.0%, followed by Saskatchewan at 20.0%. Only the territories at an incredible 59,0% are higher.

What can you say about these sort of numbers ? One is that they give the lie to the Conservative propaganda that "Canada has escaped the worst of the economic downturn". Yes, maybe in terms of both the rich and those with secure employment. There are, however, huge numbers of people who very plainly haven't escaped at all. The smoke and mirrors of the federal Conservative "stimulus program" which ended up not spending the majority of its promised funds is now giving way to plans for "austerity"...read further attacks on the lowest income groups in the country while maintaining as many corporate give-aways as possible.

Not that this sort of duplicity is unique to the Conservatives. A Liberal federal government would have acted essentially the same, Perhaps without the utter contempt for truth and the public of a bald faced lie about funds that would never be spent, but with essentially the same set of fiscal priorities. Both major parties are entirely wholeheartedly committed to maintaining an economic system that embodies massive inequality. The NDP and the Bloc Quebecois are committed to tinkering around the edges of the system, often merely to gather votes and reduce social tensions. Their "solutions" leave the mountain intact and chip off a few sharp stones that irk people too much.
Anarchism, on the other hand is committed to a full revamping of the way we do economics, a program that radically reduces inequality. Maybe not eliminating it entirely but definitely abolishing logical absurdities such as the idea that some who make literally 100,000s more income than others do 100,000s more work (a physical impossibility by several orders of magnitude). Or the idea that their work (which far too often consists of purely useless financial manipulation or even literally doing nothing is 100,000 times "more valuable". Put frankly common sense says that there is not a single coal miner, farmer, hydro technician, nurse, snow cleaner and many others whose work is immensely more valuable than the "work" done by corporate executives who continue to profit economic downturn or not.

Now, as I have expressed before on this blog I don't see the transition to a freer and more equal society as coming about through some apocalyptic "revolution", though there will certainly be high tension at certain periods of time. The transition will be years, decades even, whereby workers gradually encroach on management power in the workplaces, where local communities struggle to take back power now monopolized by federal or provincial governments , where trade deals that bind citizens to agreements that are against their interests are abrogated, where laws and social work interventions that restrict personal freedom are eliminated one by one, where cooperatives, both producer and consumer, experience a resurgence that gradually brings larger sections of the economy under democratic control, where financial institutions cooperative and mutualistic in nature, gradually gain the economic clout to finance startups of such initiatives, where local small business is protected both by elimination of the government programs that favour the corporations and by a change in attitude of the population that sees the value of the local community. Where laws that are simply ill-mannered attempts of others to control the victimless actions of others are repealed. Where it finally dawns on social action groups that accepting government grants is the kiss of death. By so many things that don't come immediately to mind.

Anarchism provides at least a general guide to what is laudable and what is not in this long term struggle. No doubt many anarchists go astray in various directions, either towards statism or to useless revolutionary romanticism, but the broad centre of the anarchist movement today is moving towards such goals. That is why anarchism provides a broad outline for the solution of inequality and the poverty that accomplishes it, though local initiate from poor people themselves. Other solutions have been tried and have consistently failed.

Thirty-eight percent of those assisted by food banks are children and youth under 18 years old.

"This is a reality check. Food banks are seeing first hand that the recession is not over for a large number of Canadians," said Katharine Schmidt, Executive Director of Food Banks Canada, which coordinated the annual national study.

"We are hearing that it is really tough out there," Ms. Schmidt said. "Many people who lost their jobs during the recession have now exhausted their unemployment benefits, and are looking to self-employment or to temporary and part-time jobs for income.

"Others have been forced to fall back on social assistance. These options aren't paying the bills, and people are accessing food banks to fill the gap."

As in past years, the profile of those assisted by food banks is highly varied:

38 percent of those assisted by food banks are children and youth under 18 years old.

Half of assisted households are families with children.

17 percent of households that turn to food banks for help each month are living on income from current or recent employment.

7 percent of assisted households report a pension as their primary source of income.
"Coming to a food bank is not an easy decision for people," said Bill Hall, Executive Director of the Battlefords and District Food and Resource Centre, in North Battleford, Saskatchewan.

"Unfortunately, there continues to be a need for help in our community, and we have expanded our efforts to meet that need — when the overall goal should be to address the causes of hunger more broadly, and to be able to reduce our services and even close our doors for good."

"Though the recession has made things worse, the causes of hunger and low income run much deeper than the recent economic crisis," said Ms. Schmidt. "The need for food banks is a result of our failure as a country to adequately address a number of social issues, including a changing job market, a lack of affordable housing and child care, and a social safety net that is ineffective."

The HungerCount provides recommendations on how the federal government can work to increase people's ability to be self sufficient. Food Banks Canada's recommendations include the following:

1. Implement a national poverty prevention and reduction strategy, with measurable targets and timelines.

4. Address the unacceptable rates of low income among our most vulnerable seniors — those who live alone, without other means of support.

About the HungerCount Survey HungerCount was initiated in 1989 and is the only comprehensive national study of food banks and affiliated food programs in Canada. Since 1997, data for the study have been collected every March. The information provided by the survey is invaluable, forming the basis of many Food Banks Canada activities throughout the year. For a full copy of the HungerCount 2010 report and associated graphics, and for more information, please visit www.foodbankscanada.ca.

Moncton - The new government of David Alward should immediately increase revenues for people who are living on social assistance - Linda McCaustlin, co-chair of the Common Front for Social Justice

"The last two Hunger Count Reports have revealed that during the last two years, there was an 18 percent increase in food bank usage in NB Just this year, the number of people using food banks has also increased. Thirty-four percent of food bank clients are children; thirteen percent are wage earners but the majority of them (61 percent) are social assistance recipients. This is completely unacceptable in a country as rich as Canada" says Linda McCaustlin.

"We are asking Hon. Susan Stultz, the new Minister of Social Development, to immediately provide all adults on social assistance with a $100 per-month healthy food allowance supplement. We are also asking her to provide an additional $35 per month per child to households receiving social assistance.

"Moreover, since the income of seniors receiving the guaranteed annual supplement is below the Low Income Cut-off (before tax), a $100 food supplement should be added to the current $400 supplement forwarded to these seniors. These food supplements should be indexed with the cost of living.

"Given that 13 percent of NB food bank users are people in the workforce, the minimum wage should continue to rise so as to meet one of the workers most basic needs, namely a nutritious diet.''

"Food is essential for life and is therefore recognized as a basic human right in the United Nations Declaration of Human Rights. The fact that thousands of NB citizens and their families go to bed hungry is a shameful result of our political leaders' inability to govern in the interest of the common good. Those members of our business community who are paying very low wages should realize the detrimental effects of this practice on the nutritional status of their employees" continues Ms. McCaustlin.

Ms. McCaustlin states: "Part of the problem of food banks being unable to cope with current demands is due to the inadequate income of too many New Brunswickers." Indeed, NB has one of the lowest social assistance basic rates in all of Canada, and it ranks as the fourth lowest in terms of minimum wage.

"The Common Front for Social Justice has heard that some segments of the business community are lobbying for a two-tier minimum wage — one applicable mainly to workers receiving tips. We hope that this will never be implemented because it would keep a large segment of workers, mainly women, in low paying jobs", continues Ms. McCaustlin.

"Food price increase is a harsh reality facing all NB households. However, the situation is more dramatic for those who work at minimum wage, for those who depend on social assistance and for those seniors living on a low fixed income".
Posted by mollymew at 11:27 AM