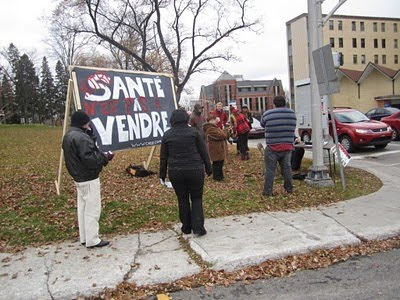 
Yesterday, November 6, the Collectif Emma Goldman of the Québec UCL, along with the student employee's union of the University of Québec in Chicoutimi organized a demonstration against the privatization of health care and fees for service. The following is translated from the original French at the Québec City Voix De Faits Blog. More details and photo reportage are available at the Collectif Emma Goldman site.
@C@C@C@C@C@C


The comrades of the Collectif-Emma Goldman (UCL-Saguenay) and the Union of students employed by the University of Québec at Chicoutimi organized a demonstration on Saturday, November 6 action against fees for service and the privatization of health care.

About fifty people gathered outside the hospital in Chicoutimi. Hundreds of leaflets, stickers against the privatization of health and the Cause Commune Express Newspapers were distributed to passers-by and motorists. This action was intended to oppose the last budget tabled by the Minister Bachand and the gradual commodification of health, through fees for service and privatization.

"The " health franchise " of Minister Bachand is a real shame. Quietly what they want with this kind of measure is to introduce into popular opinion that the idea that everyone should pay for health care. We are going back to 50 years ago. Moreover, on November 1st, we celebrated the 40th anniversary of universal health insurance. The idea behind the scheme was to ensure universal quality free health care to everyone funded through a progressive tax. "The Charest government is taking the ax to an important part of our gains and our struggles ", said Stephen David Bellemare, President of the Student Employees' Union of the University of Québec at Chicoutimi.

"Over the last thirty years we have seen attacks by successive governments, whether Liberal or PQ. Anything that is not beneficial to economic growth is considered unnecessary. Education, health care, social programs, public services in general are all affected by this ideology of capitalist profitability. These attacks are occurring throughout the West. Greece, Spain, England, France, everywhere they ask workers to tighten their belt when we know that all these governments have given billions of dollars to banks. It is an international struggle, we must never forget that. "

"Always in the service of the rich and business, this government despises the working class and poor. Charest and his cronies have chosen their camp for a long time and it is not ours. The government is working hard to destroy everything that was built in the public interest to ensure a society that is a little more fair and equitable ", Stephen David Bellemare expressed indignently.

==> More details and pictures on the blog of the Collectif Emma Goldman
Posted by mollymew at 11:43 AM

thanks for the translation

You're welcome, though it is a continuing source of disappointment to me that other anglophones whose French is much better than mine don't step up to these translations. Most anglophone Canadian anarchists seem to pay far more attention to things happening in the USA than they do to what is happening in Quebec.

PS:
My sincere congradukations to the Chicoutimi comrades for honing in on what really matters to ordinary people. It's too bad other anarchists can't be as skillful.

Only initiatives will construct a canada-wide anarcho-communist movement (I'm not meaning one single organization, but organization everywhere). This is the point where we are.

Thanks for translating and helping putting Saguenay anarchists on the map (something even montreal broader-anarchists forget way too oftenly!)