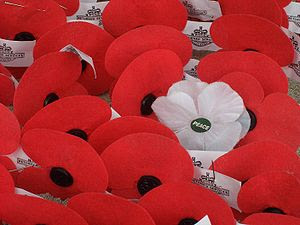 HISTORY:
REMEMBER AND PREVENT:
November 11 is Remembrance Day in the anglosphere, a day set aside to remember the war dead and hopefully resolve to avoid such tragedies in the future. But how much of this remembrance is actually glorification of militarism ? This is especially apt in the case of WW1, where the actual reasons for the war cannot be honestly discussed without criticizing societies founded on profit and the state. Here's a Remembrance day item from the Canadian anti-militarist group Cease Fire asking your opinion.
RDRDRDRDRDRD
Is Remembrance Day too much about war, and not enough about peace?
Add your comment below


Remembrance Day is changing as the veterans of the First and Second World Wars, and the Korean War, pass away. Today more attention is being paid to the veterans of recent conflicts, such as Afghanistan, and the speeches from Government officials freely connect the battles of the past, such as Vimy Ridge, with the current fighting in Kandahar.

This is leaving many to wonder why we gather together each November 11. Is it to mourn the dead, or to adulate them? Do we lament war, or commemorate it?

Remembrance Day was first marked within the British Commonwealth (which included Canada) on November 11, 1919, at 11 a.m. to commemorate the end of the First World War upon the German signing of the Armistice.

According to the Government of Canada, we continue to celebrate this date to

“… honour those who fought for Canada in the First World War (1914-1918), the Second World War (1939-1945), and the Korean War (1950-1953), as well as those who have served since then.”
Red poppies became a popular symbol of Remembrance Day due to John McCrae’s poem “In Flanders Fields” and their blood-red colour. His famous poem is hardly a call for peace. Instead, through McRae, the voices of the dead soldiers urge the reader to fight on, and “Take up our quarrel with the foe.”


However, this militarized focus on Remembrance Day is not shared by all. One of the most prominent examples of this is the white poppy campaign, which dates back to 1933. This poppy is meant to symbolize the need for peace and to commemorate the war-related deaths of both civilians and service men and women.

The white poppy campaign is not without controversy even today, as some peace groups seek to revise the anti-war symbol. The Royal Canadian Legion and other groups feel that it denigrates the symbol of those who have died while serving their country (as well as infringing on the Legion’s trademark of the red poppy symbol, used in their fundraising – page 41 of the Poppy Manual).

What is your opinion?

Do you feel that Remembrance Day has become a commemoration of war, or does it remain a time to think about peace?
Posted by mollymew at 10:53 AM