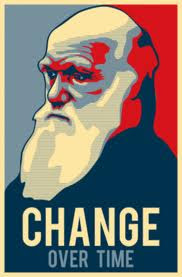 TODAY IN HISTORY:
ANNIVERSARY OF 'THE ORIGIN OF SPECIES'
**********
It was today in 1859 that Charles Darwin published 'The Origin Of Species'. It can be argued that this has been the most influential book of the modern age. Today pretty well anybody involved in the sciences is a "Darwinist". This doesn't just apply to the obvious disciples such as biology, anthropology or archeology. Evolutionary thought is now a paradigm in fields as far apart as cosmology, geology and even chemistry.

Those who refuse evolutionary thought are a tiny minority, at least outside of the USA. On the left there are a tiny number of academics who deny that evolution has anything to do with humans. On the right the USA is the only country in the world where large numbers of people oppose the idea of evolution for religious reasons. In a strange twist of "survival of the fittest" America still has to come to terms with its high class university system bleeding India, Russia, China, Japan and Korea for talent while at the same time religious obscurantism helps to keep the public school system in the USA as substandard.
Posted by mollymew at 5:11 PM

Actually, Canadians aren't that much better than Americans when it comes to acceptance of evolutionary theory.

Here's a poll that was conducted in 2007: http://www.angus-reid.com/wp-content/uploads/archived-pdf/ARS_Evo_Cre.pdf

Only 59% of the population accept the theory of evolution. Also, 42% of the Canadian population believe human beings and dinosaurs co-existed.

What people on the left refuse to accept that humans evolved? This is the first I have ever heard of this. Must be some loony cult I guess.

I'd like to see how the poll was conducted and whether the 59% is solely from "strong believers" or includes the "mostly believe' as well.