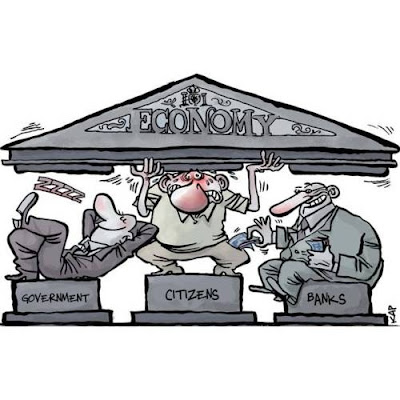 PERSONAL
WHAT I LIKE ABOUT THE OCCUPY MOVEMENT PART 3

As I've mentioned before, both here and on my Facebook page, the very fact that the movement has refused to set up a list of demands to the power elite is a source of strength not weakness. What the Occupy movement is is a widely based challenge to the very power of that elite to direct society. It is not a delegation ,cap in hand, for whatever meagre reforms the elite my offer. The very lack of clarity that the movement is accused of is actually a formidable strength.

A consequence of this refusal to limit the movement's meaning to a shopping list is the amazing fact that the Occupy movement has touched the "Populist Chord" that the traditional left has been unable to play upon for decades. Looking at the participants one sees a broad cross section of society, and the "99%" slogan has caught on with a population not yet ready to camp out themselves. I have noticed a truly remarkable absence of the usual lefty private language and even the fractious "anti-isms" that doom most leftist movement. Those who have taken up this struggle obviously understand the value of unity, and they act accordingly. This has hardly been the case amongst the left of the last few decades, and it is a welcome breath of fresh air.

This lack of particular demands is actually quite unifying. The Occupy movement doesn't just demand a larger slice of the pie for groups a, b, and c. It says there is a whole different and better way to cook pies.
Posted by mollymew at 11:07 AM

Saw a great speech given by Michael Moore at Fora TV where he discusses the occupy movement. Very interesting.

When the protestors stop asking for other people's money - that of pensioners, investors, bank depositors, your neighbours - they will gain a lot of credibility!

To Keditanstalt.
I think I'm going to handle your objections one item at a time. First pensioners:

What pension do you mean exactly ? If you are speaking of the simple social security (or whatever it is in the USA)then any straw poll of people who participate in any Occupy movement across the world would show a 100% !!!! agreement that pensions should be increased. Do they propose doing this by raising taxes across the board. VERY obviously not. The general reformist demands of the movement would say that taxes should ONLY be increased on the wealthy. Or perhaps simply to get them to pay ANYTHING AT ALL.

More on other pensions later.

OK, now that social security pensions (like the CPP here in Canada) have been dealt with let's look at another form of pension ie those negotiated via unions with individual firms. If these things are PROPERLY managed ie in a conservative (small c) way then changes in tax regimes leaves them basically unaffected. That is UNLESS you are clueless enough to suggest that necessary tax revenue changes to increase universal pension coverage would have to be taxed out of the proceeds of such pension plans. Once again a survey of the Occupy movement would suggest that such a scheme would be 100% disapproved.

If anything the Occupy movement would handcuff the ability of corporations to dodge out of their pension liabilities via such means as "fake bankruptcy". There are large numbers of pensioners who woulad actually get at least some money if things were the way the Occupy movement wants.

Then there are those pension plans that over invested in equities...not small c conservative management. But this is another post.

Finally we come to the last form of pensions ie those invested in equity. Employer/employee pension benefits may partake of this (recently proven) unsafe investment option, but RRSP funds in Canada and whatever the equivalent is in the USA are heavily weighted to this form of investment, almost to the point of being synonymous.

Suppose that anything the Occupy movement would propose that might affect the return on these investments would be considered. The first response in my mind is a rollicking laugh. In this case you are not just closing the barn door after the horse has left. You are closing it after the horse leaves, gallops 20 km, jumps into the river, swims downstream to the ocean, signs on to the merchant marine, goes to France and joins the Foreign Legion under an assumed name.

The ordinary pensioner whose funds are in equities have been robbed by the corporations that the Occupy Movement wants to bring under control for a long time now. The vision of the world that Occupy holds up is one in which the opportunity to screw the small investers along with the workers is seriously restricted.

To sum up a pensioner has many reasons to support Occupy, and NO reasons to believe a piece of mendacious alarmist pro-corporate propaganda.

And as a pensioner I am 100% in support of Occupy! Helping our group out as I can. This is the best thing to happen since 1968!

Personally I'm not a pensioner though I am in that age range (60 years and counting). As someone who is self employed I expect retirement to come on me with trauma. Ouch ! Still, as Larry has said (and I have said above) the Occupy movment poses NO threat to us older folk. We took our lumps already when RRSPs and other pensions tanked due to "pirate bankruptcy".