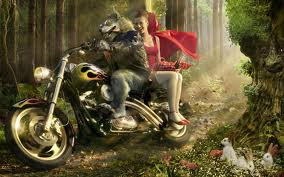 LITERATURE:
SO THEY NEVER DID LIVE HAPPILY EVER AFTER:

I have recently finished 'The Collected Fairy Tales Of Hans Christian Anderson, and am about 80% through 'The Collected Fairy Tales Of The Brothers Grimm'. Lots of things could be said about these collections. The most obvious one is the bourgeois pietism of Anderson which creates a much"grimmer" picture than the bucolic peasants of the Grimm tales.


One little example, however stands out to me. I am reading direct translations from the Danish and German, and guess what ? The phrase "and they lived happily ever after never appears. I suspect it was a Victorian invention to sanitize death out of the originals. Here's a few examples of how the Grimm tales end:

1)"During the rest of their lives the farmer and his wife were tormented by a guilty conscience and spent their days in poverty and misery. (The Poor Boy In The Grave)

2)"The king drowned, but Hans married his daughter and became the king" (The Griffin)

3)"And the ungrateful son had to feed the toad every day; otherwise it would have eaten away part of his face. Thus the son wandered about the world without a moment of rest" (The Ungrateful Son)


The book purlates with such endings, some grimmer than others. About the closest one gets to the traditional fairy tale ending that we grew up with would be statements like, "...and so they lived happily until they died". I'm not a literary historian by any means, and so I am left to wonder when and why the classic fairy tales were bowdlerized.
Posted by mollymew at 3:06 PM