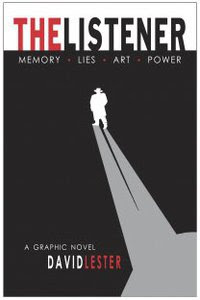 LOCAL EVENTS WINNIPEG:
'THE LISTENER' BOOK LAUNCH:
Coming up soon here in Winnipeg: the book launch of the graphic novel 'The Listener' about the political propaganda surrounding the rise of teh Nazis to power in Germany. Down at the Mondragon - 81 Albert St.
◘◘◘◘◘◘◘◘◘◘◘
David Lester & Mecca Normal Present "The Listener"
Time Wednesday, June 8 · 7:30pm - 10:30pm

What is THE LISTENER about:

...The Listener, a 312-page graphic novel by David Lester reveals a tragic act of spin doctoring that changed the course of history. Complacency, art and murder collide in Hitler's terrible rise to power in 1933, and in the artist Louise Shearing's search for meaning in the art of Europe after the fictional modern death of a political activist.

Who is David Lester:

David Lester is a painter, graphic designer, cartoonist, and the guitarist in the rock duo Mecca Normal (13 albums on K Records, Matador and Kill Rock Starts). His book, The Gruesome Acts of Capitalism went into a revised second printing and has been required reading in a university English course called Studies in Contemporary Literature. He has created the poster series “Inspired Agitators,” archived at The Center for the Study of Political Graphics in Los Angeles, and designed the popular t-shirt “Actually, I like crap.” Lester also does a weekly illustration, with text by Mecca Normal bandmate Jean Smith, for Magnet Magazine. His art has been published in DrippyTown #4, Warburger (Slovenia), MungBeing, Z Magazine, Reproduce & Revolt: A Graphic Toolbox for the 21st Century Activist (AK Press), Celebrate People’s History (Feminist Press), and The San Diego Reader.

Who is Jean Smith:

Jean Smith is the author of two published novels and a two-time recipient of Canada Council for the Arts awards as a professional writer of creative fiction. Excerpts of her fiction and articles on culture have appeared in Village Voice, NPR online, the American Book Award winning anthology Sounding Off!: Music as Resistance / Rebellion / Revolution, The Globe & Mail, the New York Foundation of Arts' Current magazine, Rolling Stone, Review of Contemporary Fiction, McSweeney's, and 3:AM Literary Magazine. Editors at Magnet and MungBeing Literary Magazine nominated excerpts of Smith’s fiction for the 2010 Pushcart Prize.
Posted by mollymew at 1:38 PM

It is not just the Canucks who have got talent on this coast.