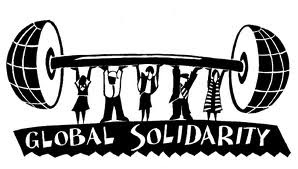 All across the "developed" world temporary workers, often referred to as "guestworkers" are employed usually at much lower wages and longer hours than workers in the country they are "imported to". Here's an item from the Jobs With Justice group asking all US citizens to support legislation that would extend equal labour rights to 'guestworkers' in that country.
◘◘◘◘◘◘◘◘◘◘◘◘◘◘◘
Support Collective Bargaining Rights for ALL workers‏

Every year, thousands of workers come to the United States via the H-2B guestworker visa program. Under this program, a workers' visa is tied to his or her employer, giving their bosses a great deal of control over their lives. All too often, workers in the US on the H-2B visa find themselves in unfair, unsafe, or even illegal work situations, but because their immigration status is tied to their employer, it is very difficult to organize for better working conditions. You may remember the story of Hilario Jimenez, a guestworker who escaped company housing to expose his employers for using taxpayer money to exploit migrant workers while excluding local workers from jobs.

But it doesn’t have to be this way. On March 17, 2011, the National Guestworker Alliance won a major victory and a vindication of five years of organizing, advocacy, and litigation as the Department of Labor (DOL) proposed new regulations of the H-2B non-agricultural visa program. The proposed regulations would ensure that workers in the U.S. through this program are not trapped in debt to recruiters and do not face retaliation for organizing to become members of workers’ centers or unions. The new regulations would also ensure that employers keep their promises to workers about the type of work, working conditions, and hours they will have, and that if they break the rules they are punished.

Big businesses are gearing up to fight these new rules that would protect workers’ rights.

Support the rights of ALL workers to organize! The DOL is accepting comments on the new regulations until May 17th.

CLICK HERE TO MAKE YOUR COMMENTS TO THE DEPARTMENT OF LABOR.

Please personalize the sample comments below.

I believe in dignified work, just migration, and equality for all workers. [ Include your personal experience/ opinion on why these rights are important for guestworkers and U.S. workers].

The current H-2B program does not protect workers. Under the current rules, debt, retaliation, and a lack of enforcement block workers from organizing and defending their rights. Any time a worker’s visa is tied to his employer, the employer has a lot of control.

I support DOL’s new proposed rules for the H-2B program because I believe:

3) Workers should not face retaliation for organizing. Employers should not retaliate against workers who organize and become members of Workers’ Centers or unions. DOL should protect a worker’s right to continue working and not face deportation if the employer retaliates against him.

I support the more detailed comments of the National Guestworker Alliance. They are a membership organization of guestworkers, and they know the solutions to make this program more fair for the workers and their families.
Posted by mollymew at 9:40 PM