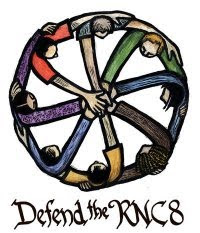 
This the latest from the Defend the RNC 8 group. The four remaining defendants will likely enter a plea bargain next Tuesday. What this means the future will tell. Here's the story.

Important Update on the RNC 8 Case:
New Hearing Tuesday 10/19 at 9am
Dear supporters near and far,

It is with strong and mixed emotions that we bring important news: there appears to be a major change in the cases of the four remaining RNC 8 defendants--Garrett, Max, Nathanael and Rob. The four have tentatively reached a plea agreement with prosecutors, likely avoiding trial. The agreement, if it goes according to plan, significantly reduces the charge, calls for favorable sentencing, and is non-cooperating.

Now, please be there in the courtroom for what we expect to be one final time:

Check our updates or the monitors in room 131 for the courtroom number. Please stay afterwards for a press conference and address immediately upon conclusion of the hearing.

We understand this news may well be surprising. Many of us feel the same and much, much more, but above all, we personally support all the defendants in their difficult decision and will continue to support them through whatever hurdles remain. We will release more information, analysis and logistical updates to you all after details are confirmed on Tuesday. We ask that, until then, speculation or rumor be kept to a minimum.

Again, thank you for your continued support and struggle.

the RNC 8 Defense Committee
Posted by mollymew at 6:35 PM