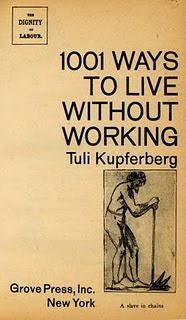 Oh dear, oh dear, oh dear. All of those influences on me when I was an obnoxious young kid (instead of an obnoxious old fart) are passing away into the great beyond faster than you can say "geezer". Shortly after my brief piece on Harvey Pekar Larry Gambone of the Porkupine Blog commented that Tuli Kupferberg of the Fugs died two days ago as well. Dead at the young age of 86. Just goes to show you that all the propaganda about living a long life by living cleanly is utter horseshit.

Now most younger readers of this blog would be unacquainted with 'The Fugs'. See the two references above for further info. Basically they were an "anti-band" formed in 1964 at a transition point where the 'Beats' were influencing the developing New Left and the so-called "counterculture". Unlike Pekar Kupferberg actually defined himself as an anarchist..of the pacifist variety, but unfortunately Kuperferberg also paid little (no ?) attention to ordinary people outside of his bohemian circles other than in sexual references. Still, working within this restriction, Kupferberg was an incisive artist, and he had many great insights at the personal and moral level. That was the nature of his anarchism and he paid as little attention to class based issues as to stamp collecting.

People who missed the Fugs missed one of the great moments in popular culture. To put it briefly this was punk music with all its good and bad points while the punkers were still in diapers or even yet to swim up the cervical canal. Right down to the foul language, quite often the contribution of Kupferberg. Such gems as 'Saran Wrap' and 'Slum Goddess' may not stand the test of time as masterpieces of English literature (no f'ing kidding !), but they put their profanity at a higher level than repeating "Fuck You" over and over.

People can see some of his later interests at his You Tube site. Also here is one of his more explicitly anarchist songs.
TKTKTKTKTK
BECAUSE THE STATE
tune: chorus of "Because the Night (Belong to Lovers)"
by Patti Smith & Bruce Springsteen

And the state holds monopoly of force
"Cop killers" also mean "cops who kill"
& tho the idea is somewhat coarse
Wilheim Reich might hold: "That's a sexual thrill"

& because the state thrives with armies
Protects its properties thru blacks & blues
Soldier boys are never called "murderers"
But what the hell is what they do?

& this "executive committee of the ruling class"
Shoves its media up our ass
Will the evil of two lessers set you free?
Now the question's: "To be internet or be TV?"

OY!
TKTKTKTKTK
Here's the obit for Kupferburg from the New York Times. A rather incisive opinion of what the Fugs were, a mixture of high culture (such as their adaption of Mathew Arnold's poem 'On Dover Beach' )and teenage sexual angst in its lowest form. Still, the mixture produced a very tasty stew. Just as an aside I've been looking up Tuli's "name change". His birth name was 'Naftali' (mentioned as the 6th son of Jacob in Genesis) which in Hebrew means "struggling". He was probably unaware when he shortened it to 'Tuli' that this form means "at peace with God' in Irish. Seems to me he should have kept the original. Here's the obit.
TKTKTKTKTK
Tuli Kupferberg, Bohemian and Fug, Dies at 86
By BEN SISARIO
Tuli Kupferberg, a poet and singer who went from being a noted Beat to becoming, in his words, “the world’s oldest rock star” when he helped found the Fugs, the bawdy and politically pugnacious rock group, died on Monday in Manhattan. He was 86 and lived in Manhattan.


He had been in poor health since suffering two strokes last year, said Ed Sanders, his friend and fellow Fug.

The Fugs were, in the view of the longtime Village Voice critic Robert Christgau, “the Lower East Side’s first true underground band.” They were also perhaps the most puerile and yet the most literary rock group of the 1960s, with songs suitable for the locker room as well as the graduate seminar (“Ah, Sunflower, Weary of Time,” based on a poem by William Blake); all were played with a ramshackle glee that anticipated punk rock.

With songs like “Kill for Peace,” the Fugs also established themselves as aggressively antiwar, with a touch of absurdist theater. The band became “the U.S.O. of the left,” Mr. Kupferberg once said, and it played innumerable peace rallies, including the “exorcism” of the Pentagon in 1967 that Norman Mailer chronicled in his book “The Armies of the Night.” (The band took its name from a usage in Mailer’s “Naked and the Dead.”)

The Fugs was formed in 1964 in Mr. Sanders’s Peace Eye Bookstore, a former kosher meat store on East 10th Street in Manhattan. By then Mr. Kupferberg, already in his 40s, was something of a Beatnik celebrity. He was an anthologized poet and had published underground literary magazines with titles like Birth and Yeah.

He had also found notoriety as the inspiration for a character in Allen Ginsberg’s poem “Howl.” As Ginsberg and Mr. Kupferberg acknowledged, he was the one who “jumped off the Brooklyn Bridge this actually happened and walked away unknown and forgotten,” a reference to a 1945 suicide attempt (off the Manhattan Bridge, not Brooklyn) that had been precipitated by what he called a nervous breakdown.

The fame that episode earned him caused Mr. Kupferberg a lifetime of chagrin and embarrassment. “Throughout the years,” he later said, “I have been annoyed many times by, ‘Oh, did you really jump off the Brooklyn Bridge?,’ as if it was a great accomplishment.”

The Fugs’ first album, “The Village Fugs Sing Ballads of Contemporary Protest, Points of View and General Dissatisfaction,” was released in 1965. The band became a staple of underground galleries and theaters, as well as antiwar rallies. In concert Mr. Kupferberg was often the group’s mascot or harlequin, acting out satirical pantomimes — an American soldier who turns into a Nazi, for example — or sometimes not singing at all.

On subsequent albums the band changed its lineup many times and acquired a more professional sound, though its scatological themes got it kicked off at least one major record label.

With his bushy beard and wild hair, Mr. Kupferberg embodied the hippie aesthetic. But the term he preferred was bohemian, which to him signified a commitment to art as well as a rejection of restrictive bourgeois values, and as a scholar of the counterculture he traced the term back to an early use by students at the University of Paris. Among his books were “1,001 Ways to Live Without Working” — and for decades he was a frequent sight in Lower Manhattan, selling his cartoons on the street and serving as a grandfather figure for generations of nonconformists.

Beneath Mr. Kupferberg’s antics, however, was a keen poetic and musical intelligence that drew on his Jewish and Eastern European roots. He specialized in what he called “parasongs,” which adapted and sometimes satirized old songs with new words. And some of his Fugs songs, like the gentle “Morning, Morning,” had their origins in Jewish religious melodies.

Naphtali Kupferberg was born in New York on Sept. 28, 1923. He grew up on the Lower East Side and became a jazz fan and leftist activist while still a teenager. He graduated from Brooklyn College in 1944 and got a job as a medical librarian.

“I had intended to be a doctor at one point, like any good Jewish boy,” he recalled to Mr. Sanders in an audio interview in 2003. Instead he began to write topical poems and humor pieces, contributing to The Village Voice and other publications.

After the Fugs broke up, in 1969, Mr. Kupferberg performed with two groups, the Revolting Theater and the Fuxxons, and continued writing. The Fugs reunited periodically, first in 1984. Recently, Mr. Sanders said, Mr. Kupferberg had completed his parts for a new album, “Be Free: The Fugs Final CD (Part Two),” and had also been posting ribald “perverbs” — brief videos punning on well-known aphorisms — on YouTube.

Mr. Kupferberg is survived by his wife, Sylvia Topp; three children, Joseph Sacks, Noah Kupferberg and Samara Kupferberg; and three grandchildren.
TKTKTKTKTK
One can only hope that Tuli is right now getting together with Lenny Bruce in heaven to put together some comedy routine to mock the pomposity of the Almighty. As Kupferberg believed nothing but nothing should be taken too seriously. Case in point...here's one of my Fugs favourites...the 'Nothing Song'.
TKTKTKTKTK

Reading: Nothing,
Writing: Nothing,
Even arithmetic: Nothing.
Geography, philosopy, history, nothing,
Social anthropology (hakalakala): Nothing.

Poetry: Nothing,
Music: Nothing,
Painting and Dancing: Nothing.
The world's great books: A great set of nothing,
Arty and Farty: Nothing.

Karlos Marx: Nothing,
Engels: Nothing,
Bakunin and Krapotkin: Nyothing.
Leon-a Trotsky: Lots of nothing,
Stalin: Less than nothing.

The Fugs sure did make some great camping music. After the subject of the Fugs came up in a conversation I was having with a Communist many years ago, the Communist said, "The Fugs! I love them. After I put one of their records on at a party a feminist took it off the turntable and threw it out the window." A distant, yet vivid, memory. Only the Free can make a record people throw out windows.