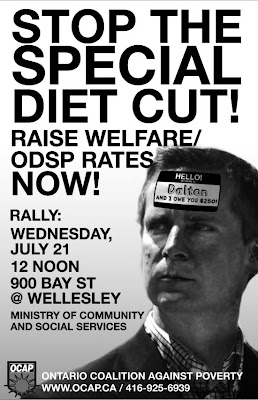 
The following is a callout from the Ontario Coalition Against Poverty (OCAP) for a demonstration in Toronto on July 21. The issues are saving the Special Diet and "raising the rates".
OCAPOCAP

When governments choose to spend money on a weekend of meetings and policing instead of housing and social services – it sends a message loud and clear of what their priorities are. On June 25th – 27th, we demonstrated not just against the cost of hosting the G20 meetings in our city, but against the plans and decisions that were being made behind the security perimeter inside that armed camp.

At the Toronto meeting, G20 leaders agreed to cut deficits in half by 2013. They have called for ‘austerity measures’, code for massive cutbacks. This agreement is going to mean a major attack on our communities in the way of huge social cutbacks, criminalization, and more.

In Ontario, austerity measures have already begun – a key example of this is the McGuinty Liberals’ decision to cut the Special Diet Allowance in the name of ‘reducing the deficit’ in this year’s Provincial budget. This government chose to cut a food benefit for people who live on shamefully inadequate welfare (OW) and disability (ODSP) rates – rates that were cut by Harris in 1995 and have never been restored.

People today are forced to try to survive on welfare rates that are 55% below what they should be!
What the Special Diet cut means:
-Poor people lose $200 million for food: the entire Social Assistance program will be cut by 3%-Single people on OW getting the full Special Diet lose 30% of their income, on ODSP, its 19%

-We will see a rapid increase in homelessness, hunger, illness,and desperation

The Liberals have said they will put in a new program. They have not told people what this will be, but we do know that it will be very difficult to access and less than the Special Diet amount if anything. We also know that this Government has done nothing since 2003 to reverse the brutal 22% Harris cut to welfare (that today is worth 55%). The time to negotiate with the Liberal Government has come to an end, the time to challenge them is now.

G20 leaders, the Federal Tories, and the Provincial Liberals think that they can offload deficits on to poor people by cutting funding to programs that we need and gutting the public sector. They are trying to force us to pay for a crisis we didn’t create.

At the same time that the Liberals are making this cut, they are giving corporations a $4.6 billion dollar tax break over the next three years! As the government begins to implement austerity measures on the local level, we have to resist them every step of the way. We need to keep our Special Diets, and we need to force a raise in welfare and disability rates now so that people can live with health and dignity.
When they say CUT BACK– we say FIGHT BACK!
Get involved in July 21st: Contact OCAP to organize outreach in your neighborhood or to build for a bus or contingent on the day.
Ontario Coalition Against Poverty (OCAP)
http://www.ocap.ca/ /
416-925-6939
Posted by mollymew at 6:50 PM