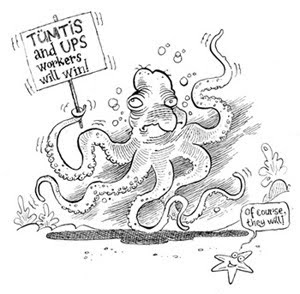 
There's an ongoing struggle in Turkey to unionize employees of the multinational UPS. Here's an appeal from the ITF via the online labour solidarity site Labour Start for solidarity with these workers.
TLTLTLTLTL
Turkey: Support sacked UPS workers
UPS workers in Turkey need your support.

The ITF-affiliated TÜMTIS has been taking steps in the recent months to unionise this company and its sub-contractors. As a result, 120 employees in Ankara, Istanbul and Izmir have been dismissed without any application of the procedures stipulated by Turkish law. UPS is a global company which says publicly in its corporate social responsibility report that it supports the rights of its workers to become members of a union. The reality in Turkey, however, is very different.

All of the 120 dismissed workers are union members or sympathetic to TÜMTIS. Others are constantly harassed not to join the union. Some were taken by force to a notary to resign from the union. On 2 July, the conflict escalated in Izmir when a manager of a sub-contractor pulled out his gun and started shooting in front of a notary. More recently, a new company brought in replacement workers in Istanbul. Such action contradicts with the claim by the management that they are reducing the workforce due to economic reasons. After these recent incidents, the ITF has written to the Turkish Prime Minister, Recep Tayyip Erdogan, to raise its concern.

The ITF and its affiliates are firmly backing TÜMTIS in their struggle against UPS. Unions from around the world have sent their messages.
Trade union delegations have been visiting the picket-line on a regular basis to show global solidarity.

However, there has been no response from the company to TÜMTIS or to the ITF. Add your concern by sending a protest letter to the Prime Minister of Turkey now. Copies of the letter will also be sent to UPS representatives including CEO Scott Davis and local management in Turkey. We want all these workers to be reinstated and all intimidations to be ceased.
TLTLTLTLTL
THE LETTER:
Please go to this link to send the following letter to the Turkish Prime Minister (and also to the Turkish division of UPS).
TLTLTLTLTL
Dear Mr. Recep Tayyip Erdogan,

I am writing to you to express my grave concern over the serious violations of trade union rights at UPS in Turkey.

I have reason to believe that 120 workers who work for UPS and its sub-contractors in Istanbul, Ankara and Izmir have been dismissed because they support the union, TÜMTIS. Other workers are constantly harassed by the management not to join the union. There was a shooting incident in Izmir which was caused by a senior manager of the company's sub-contractor.

These recent events violate the fundamental workers' rights as enshrined in the Core Conventions of the International Labour Organization. It also goes without saying that accession to the European Union will require some fundamental changes to the current climate of industrial relations in Turkey. Actions taken by the UPS Turkish management and its subcontractors are also damaging the reputation of this global company, which enshrines in its Code of Conduct the promotion of a sound relationship between trade unions and the management.

I urge your immediate intervention to resolve this situation so that all the sacked workers are reinstated unconditionally and steps are taken to ensure that no further victimisation takes place at UPS and its subsidiaries.

Yours sincerely
Posted by mollymew at 10:52 AM