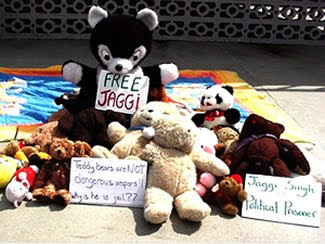 Jaggi Singh is a Canadian activist with one of the more colourful careers in the country. The graphic, of course, is from his role at a previous protest where he constructed a catapult that was used to launch teddy bears at the police. This is somehow some sort of "horrible weapon". The charges were eventually dropped. Even courts can recognize absurdity given enough time.

There has been a warrant out for Singh's arrest for involvement with the recent G20 protests in Toronto though it is a certain fact that he had no part of the tiny group of rioters that the police used an an excuse for their subsequent reign of terror. Earlier today Singh turned himself in for arrest to the Toronto Police, but before he did so he gave this interview to the Media Coop.

Jaggi would like anyone sympathetic to his cause to write him while he is prison. He can be reached at:
Jaggi Singh
c/o Maplehurst Correctional Complex
Box 10
661 Martin St.
Milton, ON
L9T 2Y3
PPPPPPPPPP
G20 arrests: "We're still at a raw moment"
Jaggi Singh speaks out before turning himself in
by Tim McSorley
Early this morning, Montreal community organiser and activist Jaggi Singh turned himself in to the Toronto Police Service. The TPS had issued a warrant for his arrest on charges of "criminal conspiracy, including alleged conspiracies to commit mischief to property, assault police, and obstruct justice," according to a release by No One is Illegal. He is the last of 16 people that police are co-accusing in conspiracy around the G20 summit held last weekend in Toronto.

Singh has become well-known over the years as an outspoken organiser and activist who has faced multiple charges in relation to international summits, including the 1997 APEC summit, the FTAA summit in Quebec City in 2001, and the WTO meetings in Montreal in 2003.

Last night, just hours before he turned himself in, the Media Co-op had a chance to speak on the phone with Singh, who was in Toronto. He spoke about his decision, what he sees as growing state repression, and how activists and organisers can work together to achieve justice.

On his decision to turn himself in and the legal challenges he and others face:

I've never shied away from legal challenges. Over the last decade there has been a long list of charges and trials, but I've come out successful. So I've decided to meet those challenges head on. From what I understand, I'm being co-accused on conspiracy charges with other organisers based in southern Ontario, Toronto and Montreal.

I don't know the content of the charges yet, but based on previous experiences I've observed, around these summit protests, it takes years for all the facts to emerge properly. [During that time] the Crown and corporate media control the spin. That's why I'm taking the time to speak out before I go in. A lot of people [who are co-accused] didn't have that chance. Many were arrested in the middle of the night... By luck I wasn't plucked out that way.

I really take inspiration from the support and solidarity of large segments of our community. In the long haul,it's not about guilt or innocence, but how we struggle together. In short haul, it's to get all organisers in prisons back into their communities where they are needed and do important work. And I use that term [organiser] deliberately. We are not just protesters. We are people who are rooted in day-to-day organizing, we have accountability to that day-to-day organizing.

In Montreal, for me, that's migrant justice, anti-police brutality, QPIRG-Concordia, and this can be applied to everyone else. We are all deeply committed to organizing. The short-term challenge, as so many have spoken about and written about, is to get everybody back into their communities. We need to plan our next steps to meet these legal challenges, but for me the most important thing is [to do so] through maintaining our organizing.

On police and state tactics:

I think in the aftermath of the G20 police state we saw in the streets of Toronto for at least a week, and particularly during a concentrated 48hr period, police and the Crown are looking for scapegoats to pin the blame on. It seems to me the people in prison up until this point are the scapegoats. None of this is terribly surprising.

Talking about the repression in general, whether it's unjust detention or humiliation, unjust searches, whether it's being charged, it's all meant to scare people away from participation in active social justice movements. Or to funnel people into [kinds of] dissension the state finds palatable. And this is not about the debate over tactics, but that people who reject the G20 are being scared off of protest.

The word unprecedented has been used a lot. It's true. The $1 billion budget is unprecedented. So are the 1,000 arrests, in Canadian history.

There's a reason it's unprecedented. It's that in 2010, with the Olympics and G20 in Canada, it's an excuse for the Harper government to build up the security apparatus. That's why CSIS is paying so many visits to organisers, why sound cannons are being bought, why [the Toronto Film Studios] are being turned into cages-you can't even call it a jail, it's cages. That's why we're seeing an escalation of the charges. What even a decade ago would have been seen as organising, discussing openly about ways to protest, is now being seen as a conspiracy.

On mutual aid and working with a new generation of organisers:

I help give Activism 101 workshops at QPIRG once a month throughout the school year. We go over the four categories the police use - opportunists, realists, idealists and the radicals. Most of us by default are idealists. Whether left or right, we want the world to be a better place, from Bono to Harper. But what separates radicals from realists is the need to identify the roots of the systems of power in place ... and to confront it.

The state doesn't want idealists to become radicals, and a main part of doing that is through ignorance and distraction. But when radicals are active, when they are on the streets, the other way is the baton blow to the face. Labeling them as terrorists. That's the other way to keep people from becoming radicals.

I've seen this before. In Montreal from 1996 to 2003/04, the police had a system of mass arrests. They'd do it over nothing really: graffiti, a minor confrontation with a police officer. The the WTO protests in 2003, Commando Bouffe in 1997, the G20 protest in Montreal in 2000. I was arrested at that with other young folks. I saw the fear and their questions about is this worth it. For some, I saw in their faces that it was about the strength of the struggle. But it's about community, about working together, about realizing those debates are making us strong.

At the G20 in Montreal, there were several, several dozen arrested. The police used horses, pepper spray, batons. Lots of young people were arrested. And it was just last year that Quebec Court of Appeal cleared everyone. One of the women who was young at the time took the microphone at the [Forum Against Police brutality, held in Montreal this past spring]and told the crowd, "I'm still here, still part of this movement, because there is this basis of support and solidarity."

If we can mutually support each other, document what has happened, and keep coming up with mechanisms to strive for real justice, we'll find out ways to get through this.

We need to be a multi-generational movement where that kind of information is shared. I was so inspired and motivated by working with a group called RAGE, a group of young people, university and college students. To have multiple generations working together, that's a strength. I hope I can get back to that tangibly. We can all offer support in different ways.

On guilt or innocence:

This is less about whether people are guilty or innocent. That's simply a verdict. What's important is how we struggle together to meet the challenges. There are plenty of times when people have been found guilty but have helped build a movement, and plenty of times people have been found not-guilty and not helped at all.Victory is not about guilt, but justice, dignity, the things we struggle for everyday. That feeling should be brought into the legal support for the people who are facing these challenges.

We're still at a very raw moment though. It's been a week, but a week is nothing. It's in the months to come that we'll see how we can come out of this stronger and more ready to face oppression.
Posted by mollymew at 8:56 PM

I can't believe in this day and age they are still trying this "conspiracy" nonsense. I know that the state's agents read our blogs so get this straight - We don't need anyone to tell us what to do, you fucking morons! Quit projecting your own authoritarian world view upon us. You may need bosses to organize things and tell you what to do, but we don't. That is what the contemporary social movements are all about, Why are you spending money on CSIS if they can't get better data on us? Or on the other hand, you realize your conspiracy charges are totally bogus and are just any stick to beat us with.

Total agreement here Larry. A totally !!!! open campaign can hardly be called a "conspiracy" by any sensible definition of the word. In the end (but it will be a long and expensive legal road to that end) the "conspiracy" charges will be thrown out. What the government hopes, however, is to leave a vague impression that there was such a conspiracy. Plus, of course, they have to justify what they did. As the events fade in public memory for everyone but those who experienced them directly only "vague impressions" will be left. The state hopes it is THEIR impressions that stick.