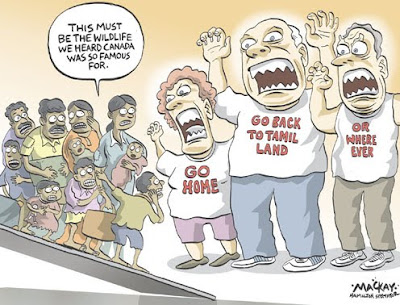 Beginning today and into next week there will be a number of rallies across the country in support of the right of the recently arrived Tamil refugees on the west coast to stay in Canada. These are being organized by No One is Illegal. Here is the story from No One Is Illegal Vancouver.
NOIINOIINOII
Canada: Stop Jailing and Deporting Refugees, Let The Tamil Refugees Stay!
Time
August 21 at 3:30pm - August 26 at 6:00pm

==> In UNSURRENDERED WET'SUWET'EN TERRITORY:
Saturday August 21
Solidarity with the Tamil Refugees and No One Is Illegal. Moricetown Canyon, noon.
Contact gitksanmanoct6@hotmail.com

==> In TORONTO:
Saturday August 21st
Toronto Welcomes Tamil Migrants!
Follow www.twitter.com/noii_ to to see images of creative actions that we will be taking.

Join No One is Illegal to call for the immediate release of detained Tamil asylum seekers, and an end to racist and restrictive refugee policies. Justice, Freedom, and Status for All!

Surviving a dangerous journey, 500 Tamil refugees, including women and children, arrived in BC after fleeing war and persecution in Sri Lanka. When the ship first neared Esquimault, territories of the Songhees First Nation, it was immediately boarded by the Armed Forces, Border Services, and RCMP. Families are now being separated, with many children being taken by the Ministry of Child and Family Development. The refugees now face the threat of incarceration and eventual deportation.

Canadian government officials and media outlets are perpetuating false and dehumanizing stereotypes of 'illegals', 'terrorists', and so-called queue-jumpers. The earlier arrival of 76 Tamil migrants on Ocean Lady was similarly sensationalized. This deliberately created hysteria appeals to prejudices of refugees as undesirable. Well-known neo-Nazis, like Paul Fromm and the Aryan Guard, also known as the Canada First Immigration Reform Committee, are openly organizing rallies for the ship to be sent back.

This fear-mongering is just another tactic used to disguise the racist policies that define Canada’s immigration and refugee system. The Canadian government was recently forced to apologize for its “keep Canada white” measures, such as the Komagata Maru incident. Yet Minister of Censorship and Deportation Jason Kenney continues to increase detentions and deportation of refugees and undocumented migrants, while bringing in more temporary exploitable migrant labour. Public Safety Minister Vic Toews recently declared that Cabinet is drafting new policies to clamp down on migrants and “make this country less welcoming for future shipments of human cargo.”

No One is Illegal-Vancouver asserts the basic human right to safety, mobility, and protection. It is well known that Tamils in Sri Lanka are fleeing military atrocities and mass displacement. The only crime the migrants have committed is transgressing this imposed settler-colonial border. We encourage you to join us in rejecting repressive, racist, and exclusionary ideologies and policies, and instead encourage compassion, solidarity, respect for life, and justice for all refugees. Release Detained Asylum-Seekers! Let the Boat Stay! Status for All!

1) Join other cities and communities for nation-wide actions. Wherever you maybe, whatever you can organize (delegation to a Minister’s office, street theatre, leafleting, community speak-out), will help build this movement. Please email noii-van@resist.ca and let us know how you can participate.

2) Engage in dialogue and widely circulate the factsheet on the 6 most popular myths about the 490 Tamil Refugees, available here: http://noii-van.resist.ca/?p=2167

4) Put up posters in your neighbourhood, workplace, and campus, and as your social media profile. We have ‘Let them Stay’ and ‘Anti Neo Nazi, Fight Racism’ posters available here: http://www.flickr.com/photos/nooneisillegal/ . PDF’s: http://bit.ly/9HBtGa and http://bit.ly/cgM3gK

5) Participate in the Call/Email/Fax Campaign to the Government and your MP. State your support for the refugees to stay in Canada and denounce the government for spreading unsubstantiated racist lies. This is easy to do and you can tell others to do the same!

To find out who your MP is and where to write them:
http://www2.parl.gc.ca/Parlinfo/Compilations/HouseOfCommons/MemberByPostalCode.aspx?Menu=HOC

6) Always take a minute to write letters to the editor and comment on news stories - make a difference in public discourse! Reinforce your support for the migrants and condemn irresponsible reporting including repeating unsubstantiated lies and giving white supremacists like Paul Fromm a platform. All letters must be short (100 words), include name, mailing address and daytime phone number of the writer; state “Letter to the Editor” in subject; and content should be in the body of the email.

7) Take your own initiative. This issue is not just the Tamil communities’ or for migrant justice organizers. The growing racist backlash that is taking root should concern all of us. Think of creative ways to disrupt this xenophobic climate (do a banner drop, host a community picnic, take some friends postering, organize a forum or press conference, distribute anti-racist zines, take action at the prison).

8) Consider inviting a speaker to your next meeting. Email noii-van@resist.ca and we would be happy to attend or suggest speakers, as well as provide educational materials.

9) Have your organization, traditional council, union, community group, or artist collective write a short public statement of support for the Tamil migrants. Please email us a copy at noii-van@resist.ca .