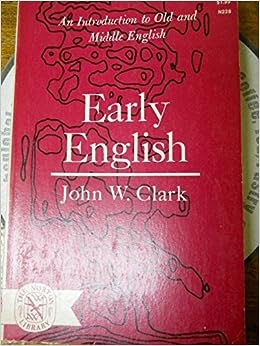 I have a small interest in languages and linguistics in general. Not that I could claim to be even moderately expert on the subject, but I've always found the field fascinating. The history of language is a field to itself, and this book makes a claim to introduce the reader to the development of the English language from Anglo-Saxon/Old English Middle English and on to Early Modern English. I hardly think I am an expert judge, but I think the author did a competent job.

He begins in the middle so to speak with some selections of English texts from various periods. The Bible is always convenient for this sort of thing, and the author tabulates Latin, Old English, Middle English and Modern English versions of a selection from the Vulgate New Testament. The similarities, differences and development are presented, and he sets to work analyzing the changes.

After this brief plunge in the waters he returns to the beginning, setting English amongst its relatives in the Indo-European language family and its Germanic branch. He uses this to introduce theories of how languages develop across geographic distances. Then it's on to an introduction to phonetics. I have to admit that I found this part somewhat hard going though I hope that at least a part of the classification of sounds into voiced/unvoiced, frictive/non-frictive, front, middle and back, high, central and low, diphthongs or not, nasal or not, palatal or not, the presence or absence of 'stops' and so on. He end this section with a chart that I must admit I didn't find as clear as I would have liked. This basic introduction, however, is central to linguists in general and to his presentation of the history of the English in particular.

From there it's into the meat of the subject; how did old English sound and how was it spelt. As to the latter he admits that most of the documentary evidence is from one dialect of Old English ie West Saxon. There is enough evidence, however, to infer the existence of other dialects, their difference from the 'standard' and at least some of the details of their pronunciation and writing. As an interesting little gemmule for those of us who have read and appreciated versions of Beowulf he mentions that OE poetry hardly ever uses rhyme. There is extensive discussion of how OE was spelt, how it was influenced by other languages and its regional variations. The author also presents many interesting items on how OE manuscripts actually physically looked. Just that is novel and fascinating in its own right.

Word forms, dialects and 'literature' (as opposed to didactic works) each receive their own treatment, and the changes English underwent before the Norman invasion are tracked, or at least speculated on. The basics of phonetics that the author previously presented are invaluable for this project, and this rather specialized treatment of one language was something of a revelation to me about the general methods of linguistics which had always seemed rather opaque before.

The discussion of Middle English and its evolution is shorter than that of OE even though the sources are far more numerous than in the earlier period. The influences of French which hardly began with the invasion and Latin are discussed as well as the 'survivals' from OE, and the reappearance of colloquial speech in written texts. The sounds of the language during this period are analysed as well as the appearance of another influence, loan words from Scandinavia.

The Middle English language was the language of Chaucer, but Chaucer was only a small part of what has survived, a corpus far greater than that from OE. Piers Plowman is frequently mentioned, and it reminded me that this work is one that I have never read even though I have seen it mentioned very often. Once more the author goes through the dialects, the development, sounds and physical appearance of the language during its changes into Early Modern English. The section on medieval manuscripts and publishing are fascinating on their on. What was important then differs vastly from what is considered noteworthy today. Attribution for instance.

All told I enjoyed this book immensely even if I am modest about how much of the technical details I actually fully comprehended. One nice little item I did take away - when people use "ye" in imitation of past English it is actually a common mistake. The letter that people misinterpret as a "y" in older manuscripts was actually pronounced "th". Thus (Yus ?) 'Ye Olde Curiosity Shoppe' was actually 'The Olde Curiosity Shoppe'. The "e"s at the end of the words have their own story as well.