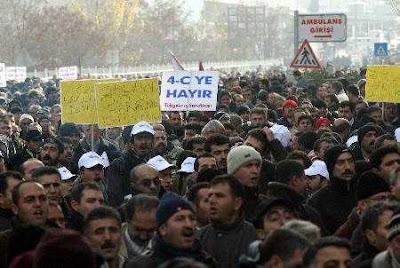 INTERNATIONAL LABOUR-TURKEY:
SOLIDARITY WITH TURKISH TOBACCO WORKERS:
The following appeal for solidarity with soon to be workers in Turkey comes from the IUF.
+++++++++++++++
Major Protest of Former Turkish Tobacco Monopoly Workers in Ankara:
Some 10,000 workers, family members and supporters are currently demonstrating in Ankara in near-freezing temperatures in protest against a snap government decision to close their workplaces at the end of January 2010.
Following the sale of the TEKEL (Turkish tobacco and alcohol monopoly) tobacco manufacturing activities to BAT in February 2008, the state retained control over the 40 warehouses where leaf and semi-processed tobacco was stored. IUF-affiliated Tekgida-Is, which represents the workforce at TEKEL, continually sought negotiations with the government over the future of the 12,000 warehouse workers. And now, after having ignored the union's calls for negotiations, the government has taken the drastic decision to close these warehouses, leaving 12,000 workers jobless and affecting a further 40 thousand people together with their families.
The workers began arriving in the capital city of Ankara on 15 December in buses from 106 provinces throughout the country. The protest is taking place in front of the headquarters of the AKP, the political party in power. Currently, the demonstrators are surrounded by police barricades and police are preventing further busloads of TEKEL workers from entering the city centre.
FLASH: Police violence is escalating in Ankara - demonstrators have been taken to hospital and Tekgida-Is president Mustafa Türkel has been arrested and taken into custody.

Act Now! - PLEASE CLICK HERE TO SEND A MESSAGE TO THE GOVERNMENT OF TURKEY AS A MATTER OF URGENCY!
According to Tekgida-Is president Mustafa Türkel, "The TEKEL workers who turned out will not leave until a solution is found. TEKEL workers are demanding their legal rights through this protest. Politicians have decided to close the TEKEL workers’ workplace. In light of this, what is right and legal is to transfer these workers to other institutions."
+++++++++++++++
THE LETTER:
Please go to THIS LINK (or click the link above) to send the following letter to the Turkish government.
+++++++++++++++
To the Prime Minister of Republic of Turkey, Recep Tayyip Erdogan,
Dear Mr. Erdogan,
It is with extreme concern that I note your government's decision to close the former TEKEL warehouses, a decision that involves the dismissal of some 12,000 workers. I call on you to ensure that negotiations with their trade union TEKGIDA-IS begin immediately with a view to ensuring that these workers are transferred to other public enterprises with their full employee benefits in accordance with the law.
Yours sincerely,
Posted by mollymew at 2:19 PM