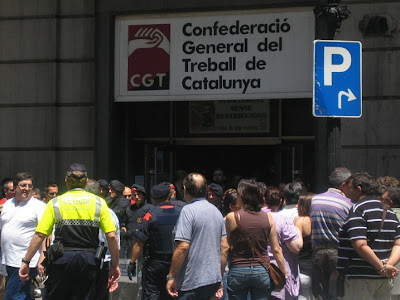 INTERNATIONAL LABOUR SPAIN:
POLICE ENTER THE BUILDING OF THE CGT CATALUNYA:
As Molly reported previously on this blog the Catalan government has "awarded" complete possession of the central union building in Barcelona to the (more or less) "ex"-communist CCOO. Today police entered the building to enforce this order. Here is a report from the Spanish anarchist news service Kaos En la Red. Translation my own.
@@@@@@@@@@
Barcelona: The police enter the building of the CGT Catalunya
Ten agents of the mobile unit of the Catalan police after an afternoon of resistance by the Local Federation of Barcelona, have entered the confederal building (Via Laietana 18) for the cleaning company that the CCOO has hired to clear the hall, according to ministerial orders. The totally surreal situation was forced by the yellow union with the intention to remove the signs that the anarcho-syndicalist union had put up to protest the ministry's decision.

The agents, at the request of CCOO, have occupied the confederal building . Throughout the day there was surveillance by the Catalan police ; finally the peaceful refusal of the Barcelona Local Federation to let students into a course on first aid encouraging them to enter the door of CCOO number 16 to occupy the building's lobby, helmets and batons ready. Stronger police action took place around 7 pm.

This new attack on the anarcho-syndicalist union, which absolutely refuses to be evicted from their local buildings after the assignment by the Ministry of the building of Via Laietana (as in the times of vertical unions) ( ie under the Franco dictatorship - Molly )to the CCOO, is part of a wider conflict about providing space for carrying out trade union activity. The CGT on its part believes that the confederal building owned by the Ministry of Labour, should be distributed in a more fair and asked for floor 8.

With the conflict deliberately fanned by the Ministry of Labour designed to undermine the local CGT , expelled from the confederal without any compensation, the CGT has undertaken a non-violent resistance that has been retaliated to by the CCOO.

The conflict is expected to escalate as the Ministry of Labour with the help of the CCOO will tighten the rope to forcibly expel the CGT, after the denunciations of a few days earlier.

This situation is very serious especially with the attitude of the police than with the bravado that characterizes them, they think they can do what they please bypassing the current law, on police entry to public buildings.

No Pasaran.
Posted by mollymew at 8:33 PM

This is really disgusting. I too visited the CGT there in 2004. What a filthy back-stabbing yellow dog outfit the CCCO must be!

I'll be very interested to see how this develops. Personally, once more outside of the Basque region, I think the CGT is overplaying its hand, but I might be wrong. I hope so. I'll try to do some more translations on this when I search the Spanish as opposed to the Catalan sources that I have read so far.

FUCK the police. The state is never too kind to those who challenge its power. Keep us updated on this.

I'll try, though I have to search to find Spanish (as opposed to Catalan) sources that I can translate more or less accurately. The latest is that the CGT has occupied a disused courthouse a little bit down the road as a temporary union headquarters. they have been told to "get the fuck out" (in a Catalan government way of speaking ie meaning this but not saying it). They have replied (significant pause...) NO. More details hopefully to follow.

Just as an aside the CGT, along with other anarchosyndicalist unions, has called for demonstrations on the 20th. Also the general assembly of the Barcelona transit has voted to support the CGT/SO/CNT Catalunya general strike on the 29th.

Is this what appears to be totally deserted building shrouded in filthy netting opposite the Laietana Palace hotel?? IS it empty? What happened since 2011?? Is the Catalan government anti-union? anti-anarchist?? Sorry am very ignorant as a mere tourist from London. Yesterday was Catalan independence day .... is this a good thing we wondered??