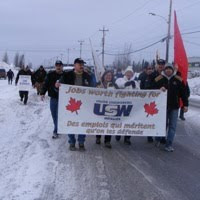 CANADIAN LABOUR NEWFOUNDLAND:
MULTINATIONAL VALE REJECTS INQUIRY RECOMMENDATIONS:
While the "big ticket" strike against the multinational mining giant Vale is now a thing of the past the strike by members of the United Steelworkers in Voisey's Bay Newfoundland is now in its 17th month with no sign of resolution. The strike was the subject of a recent provincial commission inquiry. The workers accepted the recommendations of the inquiry, but the company rejected them. From the viewpoint of such a company there is no need for compromise, and they feel free to ride roughshod over anyone working for them anywhere in the world. Here is the press release from the United Steelworkers about this news.
◘•◘•◘•◘•◘•◘•◘•◘•◘•◘•◘•
Commission Report Requires Immediate Government Action
11 January 2011
In Brief

Industrial Inquiry Commission Report
(http://www.usw.org/admin/media/documents/files/InquiryReport.pdf )
HAPPY VALLEY-GOOSE BAY, NL - The Industrial Inquiry Commission on the Voisey's Bay labour dispute is overwhelmingly damning of Brazilian mining giant Vale.
If Vale does not accept the commission's recommendations to settle the 17-month strike, the Newfoundland and Labrador government must act immediately in the best interests of our province's working families, the United Steelworkers (USW) union says.

"The inquiry commission's report is unequivocal in its conclusions," says USW staff representative Boyd Bussey. "The report confirms that the union made considerable efforts to reach a settlement, but those efforts were not reciprocated by Vale."

The commission's report speaks for itself:

"(Vale's) approach seemed to send a clear message to the Union that Vale did not view the Inquiry process as important or useful;"

"The Union made significant movement by not only formally dropping a number of its outstanding issues but also by accepting the Employer's position" on several issues;

"(Vale) has through the process of this Inquiry chosen not to alter its position from that presented to the mediator and the Union on October 3, 2010, despite the fact that the Union made significant movement in its position;"

"It is apparent to the Commission that the Employer has an approach that does not contemplate compromise on any basis that might be acceptable to the Union;"

"...the response and reaction from (Vale) was in fact quite negative. (Vale) maintains that it has a desire to conclude a collective agreement, but its actions and reactions send the opposite message;"

"(Vale) apparently believes ... that an employer should be allowed to circumvent a union's right and obligation to bargain on behalf of its membership ... this behaviour demonstrates disrespect for the role of a bargaining agent. It is not surprising that this has contributed to a continued failure in these negotiations."

"Vale's arrogant dismissal of the value and importance of this process cannot be tolerated by the people and the government of Newfoundland and Labrador," Bussey says.

"The inquiry commission was given an important mandate by our government and it fulfilled this mandate by recommending a fair and reasonable settlement to end this 17-month dispute. The Steelworkers accept the commission's report," he says.

"It is unacceptable for Vale to so arrogantly and cavalierly dismiss the inquiry process and its recommendations, and to prolong this dispute.

"If Vale continues to reject such a settlement, our government must act immediately to bring an end to the pain and suffering of so many working families, First Nations and other communities in our province," Bussey says.

The union is recommending that the striking workers, members of USW Local 9508, support the settlement package proposed by the inquiry commission. Union members are voting on the proposal this week, with results expected Wednesday.

"Vale has shown it is not interested in compromise," Bussey says. "This is a foreign corporation that is accustomed to holding an incredible imbalance of power over its workers and it is prepared to use scab labour and abuse its massive wealth to get what it wants."