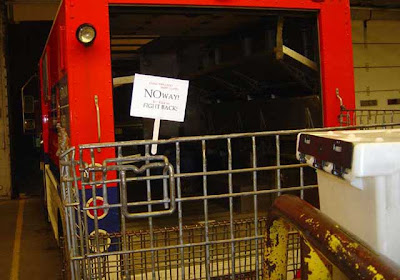 CANADIAN LABOUR:
WILL THERE BE A POSTAL STRIKE THIS SPRING ?:

As the following article from Canadian Business says the Canadian Union of Postal Workers (CUPW) has filed for conciliation with their employer Canada Post. While the union has made efforts to be conciliatory the attitude of management is anything but, as recent events in Winnipeg surrounding the new methods of postal delivery have shown. See The Workers Struggle With The Modern Post for the ongoing story of harm to the workers and decreased service to the public. Meanwhile you can hear the story of the union's call in a video at the CUPW site. But the following article pretty much says it all about management's attitude.
CPCPCPCPCPCPCP
Union at Canada Post applies for conciliation; starts strike clock ticking
By The Canadian Press

OTTAWA - Citing what it claims is intransigence by management, the union representing 54,000 workers at Canada Post announced Friday that it has applied for conciliation, a move that starts the clock ticking towards a possible strike this spring.

"We've taken this action because Canada Post has to move from its hardline position on demanding significant concessions from our members, even while it continues to post profits and spend money on technological changes," said Denis Lemelin, national president and chief negotiator for the union.

A government-appointed conciliator will now attempt to bring the Canadian Union of Postal Workers and Canada Post Corp. to a negotiated settlement.

However, the union also noted that the appointment of a conciliator starts the clock ticking towards a possible strike or lockout by the end of April.

Canada Post issued a statement saying it "welcomes the assistance of a conciliator in our discussions with CUPW and is optimistic it will help us reach a negotiated settlement."

CUPW said that among concessions Canada Post is demanding is the replacement of sick leave with a short-term disability plan.

Management is also insisting on new work methods that the union considers unsafe — methods that have already "created huge problems and disruptions of mail service in Winnipeg, where they were first implemented last year."

Rollbacks demanded by management also include the imposition of a defined contribution pension plan for new hires rather than the current defined benefit plan.

"The union is adamant in its rejection of a two-tier system," CUPW said in a news release.

"Canada Post wants to eliminate the current pension plan for new hires now and then impose the new scheme on all employees during a future round of bargaining," Lemelin said.

"We have to take a strong stand now to maintain our public postal service and ensure that future workers will not suffer a deterioration in their working conditions."

Friday's move by the union comes just days after the government-owned corporation announced the appointment of a new CEO. Deepak Chopra, formerly president and CEO of the Canadian and Latin American regions of Pitney Bowes, a global mailing and communications firm, begins his five-year term beginning Feb. 1. ( No, not that Deepak Chopra, but quite ironic given that the Corporation wants to perform some mystical flimflam - Molly )
Posted by mollymew at 9:02 PM

Hi. My name is Molly Mew. Honestly, that really is my name. I would really appreciate it if you altered the name of your blog. Is that at all possible? I don't mean to make this difficult for you, but it causes some issues with prospective employers thinking that I write your blog.
Thank you

Sorry, it won't happen. If you live in Surrey BC I'm sure that you can explain to employers how you have nothing to do with a blog from Winnipeg. Much easier to do than explain how you are not one of the 10,000 cats named on the internet as "Mollymew".

I've become utterly fascinated by this little post. By Mollymew's ultra secret tracking devices ( patent pending ) this comment seemed to come from Surrey BC. (But I could have made a mistake) Now by great !!!! diligence I have actually managed to track down one !!! real Molly Mew on the internet (from Alaska) and two people who use it, as I do, as a "handle". One is somebody from Manchester who was playing around on the internet game 'Farmville' as well as another social media site. Another is a real estate agent way down in the USA.

The person who wrote this comment has never bothered to drop by again which makes me wonder greatly. The term "Molly Mew", of course, is saturated, saturated, saturated by cats on the internet, and Molly's Blog was originally named after one such feline wonder.

The "real" Molly Mew is a truly go-getter girl from Alaska who managed to finagle a trip to Mongolia of all places out of 'Doctors Without Borders'. She's actually quite a good writer and an obviously bright individual. She'd HAVE to be if her parents were sadistic enough to give her THAT name. It's sorta like the old Johnny Cash song 'A Boy Named Sue'. Basically she'd have to be two to three times better than anyone else just to survive the eternal mockery.

My great hope is that she didn't fail in getting into medical school. If she did I'd advise her to try and try again after taking some other course in University. I further hope that she isn't into some paranoid American fantasy about how she could be confused with an anarchist about 4,000 kilometers from where she lives (craziness is more common in America than in Iran ) as she shifts career choices. Or (my own paranoid fantasy) she has been approached by the agents of her evil government to spy given her international travel. If she has I'm sure the confusion has been cleared up by now (a VERY good reason not to drop back).If that is the case I am very pleased to have provided some excitement (tee hee) for some people who are doing things they should not do.

Now maybe I'm totally out to lunch on this and there another ! young and naive girl in BC who hasn't worked out how to deny me three times before the cock crows. I'm inclined, given as I've been working on this blog for about 4 and 1/2 years and WELL over a quarter of a million people have visited here, to start saying things about packed frozen water, the place of perdition and the mathematics of probability. Are maybe do what you should have done after the 575,000th bad joke and legally change your own name. There are a few other 'Molly's Blogs' on the internet, but if popularity and precidence is any indication I've got owner's rights. But the internet doesn't work that way.

But on the final "on the other hand" maybe somebody was simply pulling my leg, has sobered up and maybe doesn't even remember that they wrote the comment.