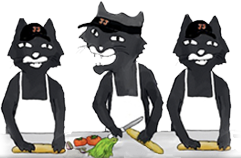 AMERICAN LABOUR MINNESOTA:
ROUND TWO AT THE JIMMY JOHNS SHOPS:
This just in from the IWW Jimmy Johns Workers Union in Minneapolis and St. Paul...the National Labor Relations Board has ruled that the previous union election that the Union lost by a narrow 87-85 vote was invalid because of massive employer violations was invalid. This once again opens the matter of organizing at these shops. Here's the story from the Jimmy Johns Workers website.
IWWIWWIWWIWW
In Big Union Victory, Jimmy John's Union Election Nullified Due to Employer Labor Rights Violations
press release
Sandwich Workers Begin New Push for “10 Point Program” to Reform Fast Food Industry

MINNEAPOLIS– The National Labor Relations Board approved a settlement today nullifying the results of the historic October 22 union election at Jimmy John's, putting victory back on the table for the nation's first-ever union in franchised fast food. The settlement validates workers' claims that franchise owners Mike and Rob Mulligan were able to squeak out an 87-85 victory in the election only by resorting to unlawful tactics including threatening a wage freeze, intentionally fabricating rumors that the union engaged in sabotage, retaliating against union supporters, and numerous other labor rights violations.

With the tainted election results nullified, the union is asking the franchise owners to negotiate over its "10 Point Program for Justice at Jimmy John's," a comprehensive package of reforms that will bring respect, dignity, and democracy to the fast food workplace.

“There can now be no doubt that our rights were severely violated, but we're willing to put the past behind us. We are calling on Mike and Rob Mulligan to make a fresh start and work with us, rather than against us, to improve the lives of Jimmy John's workers and their families by negotiating over our 10 Point Program for modest but urgently needed changes,” said Micah Buckley-Farlee, a delivery driver at Jimmy John's and active member of the union campaign.

Based around benefits that workers in many other industries take for granted, the program is the response of Jimmy John's workers to their most pressing problems on the job. Core demands include sick days, improved job security, guaranteed work hours, a reasonable pay increase and regular raises, improved harassment policies, other basic job benefits, and the establishment of a system of shop committees giving workers a democratic voice within the company.

If franchise owners Mike and Rob Mulligan refuse to cooperate, the union has indicated a willingness to return to the trenches and continue the fight for union recognition, this time on terms that are much more favorable to the union due to the settlement agreement.

Under the NLRB settlement, Jimmy John's must cease engaging in a wide range of unlawful anti-union activities, post notices informing employees of the company's new commitment to obeying the law, and host a series of mandatory employee meetings in which a representative of the NLRB will read the notices in the presence of the company owner.

In 60 days, the Union will also be eligible to file for a fresh election at any point in the next 18 months, with an abbreviated “campaigning period” of 30 days, 12 days shorter than what is customary for NLRB elections.

Union member Ayo Collins said, "Mike and Rob Mulligan can either continue their losing battle against their employees, or they can work with us and distinguish themselves as leaders in bringing much-needed change to the nation's fast food industry. For our part, we're hoping for the best and preparing for the worst. We are more confident than ever that in the end, we will win, setting an example for 3.5 million fast food workers to follow."

The Jimmy Johns Workers Union, open to employees at the company nationwide, is affiliated with the Industrial Workers of the World labor union. Gaining prominence in recent years for organizing Starbucks workers, the IWW is a global union founded over a century ago for all working people.