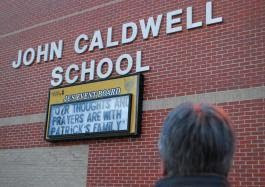 CANADIAN LABOUR NEW BRUNSWICK:
STUDENT WORKER KILLED ON JOB AT WALMART:
Three days ago a grade 12 student working part time at the WalMart in Grand Falls New Brunswick was killed on the job, electrocuted while operating a floor scrubber at the store. One wonders if the store closed for even a minute out of sympathy. Here's the story from the New Brunswick Daily Gleaner.
NBNBNBNBNBNB
Victim died while working at store in Grand Falls
By HEATHER MCLAUGHLIN
mclaughlin.heather@dailygleaner.com

WorkSafe NB has launched an investigation into the apparent electrocution death of 17-year-old Patrick Desjardins of Drummond.

Desjardin was using a commercial floor scrubber in the garage section of the Wal-Mart store's automotive department when the incident occurred.

A defective extension cord is being examined as a possible cause.

WorkSafe NB said the garage area was damp and that the buffer machine was old.
( I guess that newer and safer equipment would lead to a price increase of 0.00001%- Molly )
"We start at the electrical panel and go all the way to the worker and look at what all the elements were and if all of them were in good condition," said Lise Malenfant, regional director, northwest region of WorkSafe NB.

Desjardins was found laying on the floor at about 8:30 p.m. Wednesday.

"He was found without signs of life, but there were no clear indications on his body as to the cause of death," Malenfant said.

Burn marks from electrocution occur where there is high voltage, but WorkSafe NB will study the results of the autopsy when it arrives.

Desjardins was transported to the Grand Falls General Hospital where he was pronounced dead.

An autopsy has been scheduled for this morning in Saint John. Grand Falls Town Police and a WorkSafe NB inspector are investigating.

Public expressions of condolence have come from school District 14 where Desjardins was a Grade 12 student at John Caldwell School in Grand Falls.

"Patrick Desjardins will be greatly missed by everyone. He was an outdoor person who loved fishing and camping with family and friends," said District 14 Supt. Lisa Gallagher.

"His friends described him as a generous, trustworthy, reliable, loving and kind person who would put a smile on their face," she said.

Although school doesn't resume until Jan. 11, John Caldwell School opened its doors Wednesday for staff and students who wanted to drop in to support each other.

With files from The Victoria-Star
Posted by mollymew at 4:20 PM