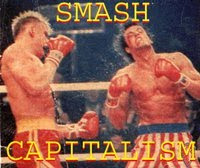 Since November of last year workers at the Stelco plant in Hamilton have been locked out by their employer, US 'Steal". Since then USW Local 1005 has been in a fight to preserve the hard won gains of decades of struggle. One part of this is a planned demonstration in Hamilton on January 29. Here is a call from Hamilton Anti-Cap for an anti-capitalist contingent during this demo.
►►►►►►►►►►

CALLOUT FOR AN ANTI – CAPITALIST CONTINGENT AT THE 01/29 “PEOPLE VS US STEEL” MOBILIZATION, HAMILTON ONTARIO

Since late November 2010 United Steel Workers 1005 have been locked out of their workplace US Steel Hamilton (Stelco) for refusing a bad deal put forward by their employer – the Pittsburgh based multibillion dollar, multinational company, US Steel. US Steel has demanded the union make a number of concessions and has taken aim specifically at pensions.

900 workers and over 9000 retirees have now been forced into a fight for their livelihoods. US Steel is attempting to exploit the current economic downturn hoping young workers feel they have no choice but “take the bait” accepting a deal that will shaft thousands of fellow union members, pensioners and workers. USW 1005 is fighting for the rights of their members to a decent living and decent retirement after a life time of labour. It is a fight that deserves support - 1005 has consistently shown their commitment to popular struggle and solidarity with the oppressed.

But what is at stake in this particular struggle will have implications beyond those immediately involved. Rather than an isolated labour battle this lockout is part of a broader ongoing attack on working and poor people in Ontario and beyond. Capitalists everywhere are acting to ensure that we pay for their crisis through cuts to social programs like Ontario Works and Disability, immigrant services, undermining our unions eroding job security and standards of living. All the while the average CEO made 155 times the average working person in Canada last year.

We need to decide that enough is enough. The Austerity Agenda can only be opposed by broad and ongoing mobilizations of working, poor and oppressed people everywhere. This why we are calling for an angry, energetic and family friendly Anti-Capitalist Contingent within the “The People VS US Steel” demonstrations on January 29th.

We will be meeting at the demonstration at 1pm at Hamilton City Hall (71 Main Street West) Look for the red and black flags!

NO JUSTICE NO PEACE! STRENGTH TO USW 1005 AND STRIKING SEIU MCMASTER WORKERS!