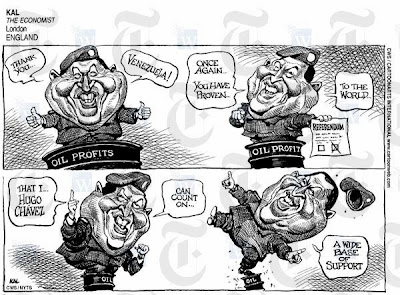 ANARCHIST THEORY:
BETWEEN 'LIQUIDATIONISM' AND 'SECTARIANISM"
The following was originally published at Larry Gambone's Porkupine Blog. It has also been published at the Anarkismo site where it is generating a vigorous debate. While the immediate impetus for the article is undoubtedly the debate around what attitude anarchism should take towards the so-called 'Bolivarian Revolution' in Venezuela the issues raised here are far broader than that one case. In its growth anarchism is coming into a situation where it can actually have an effect on popular movements in many countries, at the same time as it is not a "major player" in any but a few isolated situations. The question revolves around what attitude to have towards other political currents and to the popular movements upon which they are based. What is the best way to proceed in each case ? Obviously this is situation dependent, and anarchists may disagree about one case or the other. What Gambone does, however, is to provide some general guidelines for such judgements.
,,,,,,,,,,,,,,,,,,,,,,,,,,,,,,
Anarchism and Radical Governments:
Anarchism is more influential and wide-spread than at any time in the last 70 years. And the movement continues to grow and develop. This does not necessarily mean that we will become the predominate tendency. Even during anarchism's previous zenith – the years immediately after World War One – we had to share the stage with other socialist currents. The most important and far-reaching anarchist movement – that of Spain in 1936 – saw the formation of a united front involving the CNT-FAI, the left-communist POUM and rank and file militants of the Socialist trade unions.

It is safe to claim that social change – let alone social revolution – will involve a number of different tendencies, of which anarchism will be one, and not always the predominant one. Anarchists will work together with the other tendencies which promote self-government and self-management, in essence, all tendencies that in some manner or other support the popular struggle. This notion is not a controversial issue among us. We are already working along side other tendencies in the environmental, peace, anti-fascist and anti-capitalist movements.

The problem comes for anarchists when the pressure of social movements gives rise to populist, democratic socialist or “revolutionary” governments. Examples of these are to found in Bolivia, Venezuela and Ecuador. How do we , as resolute anti-statists, relate to governments, which in some manner, reflect and act according to the needs and desires of the social movements and the working population? How we react to these situations can be fraught with danger to our movement.

In the past, anarchists have reacted in two opposing and erroneous ways. One might be called “liquidationalism”. Here anarchists give up their distinct program and dissolve themselves into the governing “revolutionary” tendency. During the Russian Revolution, thousands of anarchists joined the Bolsheviks or formed-Bolshevik inspired organizations in their respective nations. Needless to say, the Bolsheviks did not enact our program! After The 26 July Movement made its turn toward the Communist Party, and Cuban anarchists were suppressed, many anarchists outside Cuba tended to ignore the plight of their comrades out of solidarity with the Cuban Revolution. Liquidationalism means giving up on anarchism entirely, in exchange for a bit of social progress, and sometimes not even that.

I think that liquidationalism comes about through anarchist weakness. There had been few attempts at anarchist revolution prior to 1917, and anarchism had “growing pains.” Bolshevism seemed to show the way. The early 1960's were the nadir of the anarchist movement and a lot of anarchists looked for anything to be optimistic about, and Cuba seemed to fit the bill. Since anarchism today is a growing force, I do not see liquidationalism as a major problem, though, of course, one never knows for sure.

Sectarianism is the other error. Surprise, surprise, democratic socialists and populists are not anarchists! We cannot expect them to carry out our program, but we can expect them to carry out the aspects of their own program that help the populace. If they do this, should they be condemned as enemies as evil as the corporatists and oligarchs? What do the people think when anarchists damn these reformers ? Sectarianism separates anarchists from the mass of the populace, who cannot understand why erstwhile revolutionaries are condemning the very actions which are improving their lives. What is even worse, is when sectarianism leads to propaganda imitating the reactionaries. According to the sectarian, the glass is never half-full, it is always empty. Should reaction triumph, the sectarians will be tortured and killed along with the other tendencies, and their sectarianism will remain as a bitter taste in the mouths of a defeated people. (1)

This is most particularly the case in Latin America where the mobilization of the populace immediately leads to polarization between the masses and the oligarchy and its supporters. If the oligarchy gains the upper hand in this struggle the result is the suppression of popular movements, torture and massacre. To think that one can stand aside during this polarization, or that it is "only a struggle between bourgeois factions and doesn't concern us" is to live in a dream world.

One cause of sectarianism is fetishizing the alleged or actual lessons of the past. The Bolsheviks turned on their anarchist allies, so too, Fidel Castro. Wherever Stalinism took over, anarchists and other radical tendencies were eliminated. From this tragic history comes an unspoken view that any revolution or government led by Marxists, real or alleged, will end up following this pattern. But history does change not merely repeating itself like a rubber stamp. Stalinism is not some Platonic Form, hovering in the cosmos, just waiting to manifest at the first outbreak of revolutionary change.

The alternatives to Stalinism – Trotskyism, democratic socialism and anarchism – were too weak in the 1940's and 50's. Stalinism was hegemonic at this time. But people learn what works and what doesn't. What was once seen as a viable model for revolutionary change – the one party state plus nationalization of productive wealth – is no longer seen as an answer. It does not create the sort of society that anyone wants.

The movement away from the hegemony of the Stalinist model began in the late 1960's. The Unidad Popular government of Chile attempted to create socialism, through a democratic process. The Sandinista Revolution in Nicaragua did not go in a Stalinist direction. Rather than suppressing all tendencies but their own, they favored a multi-tendency democracy – even for the right-wing, a kindness that was not acknowledged.

What then should anarchists do in the face of new revolutionary or progressive regimes that work to some measure in the interest of the population? First off; Our loyalty is to the people, not the government – or any government. If the people support a progressive government it is because that government is responding to their wishes. A direct frontal attack on such a government – until it truly begins to work against its supporters – is futile and creates a wedge between us and the people.

We should remain non-committal, as long as the government somehow acts in the popular interest. When it deviates from that path, we criticize. But there is also a way of criticizing that is not off-putting to the people. That method is one of positive re-enforcement. To never cease bringing up the need for direct democracy and self-management. If the progressive government is reticent to go beyond words, our unending needling on these points will be a powerful criticism, yet will not be seen as a negative attack. Our goal should be to push the progressive government, from below, to either the breaking point where it exposes its reactionary other face, or to where it begins to dissolve itself into popular power. And if this process cannot be pushed to its libertarian fulfillment, we must win a strong base among the people, in the unions, neighborhoods and social organizations, to defend our gains and build a base for the next step in the struggle.

We must involve ourselves with the populace, if the people win some measure of self-government and decentralization, we should be there, pushing these measures to the full. If the revolutionary government encourages coops, we should form them or join them, making sure they are autonomous and democratic. Should reactionaries attempt to re-establish their rule through a coup, electoral fraud or invasion, we must be at the forefront of the resistance, not as government lackeys, but as supporters of the popular movements the reactionaries will destroy if they regain power. Our slogan should not be “Defend our Government”, but “Defend the People ... our Neighborhoods, Trade Unions, Cooperatives etc.” At no time must we ally with reaction, even verbally, no matter what our differences with the progressive government.

1. During the campaign to overthrow Allende, the CIA funded a strike of truck drivers. The sectarians of the day crowed about the strike as an example of "class struggle" against the wicked Allende reformists.
,,,,,,,,,,,,,,,,,,,,,,,,,,,
MOLLY NOTE:
THE PROVIDENTIAL POLITICAL PARABLE OF THE PEA AND THE PUMPKIN
Let's look at this question in another way, as something of an Aesop's fable. Here you are at the edge of a river. It certainly seems wide, though it is wider at some points than others. You have no idea of its depth. On the other side is your friend, and he is hungry. What is more he is getting weak, and he is assailed by enemies, one a long term one and another who has pretended to be his friend.

Crossing the river seems out of the question. All that is left to do is toss food to him. Now you have a variety of foodstuffs to choose from, from a pea to a peanut, to a hazelnut, to a walnut, to an orange, to an apple, to a grapefruit, to a pound of bacon, to a chicken, to a turkey to pumpkins of all sizes, from the smallest to the man-eating monsters that grow somewhere in the backwoods of Kentucky. Suppose that "food quality" doesn't matter. All that counts is the gross poundage that you can heave across the stream.

Now surely you'd like to get the most food to your friend as quickly as possible. There are all sorts of choices. Throwing peas across one by one is inefficient if you can huck grapefruit at the same rate. Trying to throw pumpkins too big to even lift, however, won't get you what you want either. The art of doing best at this game is to pick the largest food item that you can throw, given your strength and given the width of the river. Both these factors vary, of course, and that is why it is impossible to give any hard and fast rules that can cover all possible situations.

There is one other factor that needs to be taken into account. A river's flow varies with the time of year amongst other factors. It's width doesn't always stay the same. Gambone and I differ about the width of the river in terms of the country of Venezuela, and we certainly differ as to the future of its regime. See the cartoon above. Great oil wealth allows great flexibility in terms of accommodating deals with local and international business and with an aspiring bureaucracy looking out for its own interests. It can patch over a great deal of incompetence, inefficiency, bumbling and outright stupidity and allow flights of fantasy in terms of self importance and buying friends abroad while, at the same time, allowing more than a little left over money free to dispense to the lower classes. Chavez has at least demagogically stated that his revolution will "continue in 2010" . Will it ?
Posted by mollymew at 8:52 PM