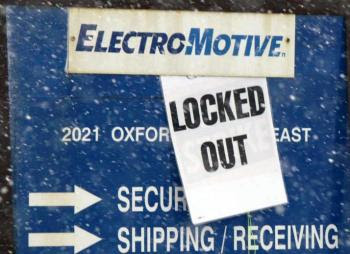 Time ticks on until this Saturday's mass demonstration in solidarity with workers at the Electro-Motive Diesel plant in London Ontario. While this is being planned the local community in London Ontario is rallying behind the workers affected who are supposed to have their wages cut by 50% as per the company's offer. There has been much discussion about the culpability of the federal government in allowing a foreign purchase of this enterprise insofar as it was "in the interests of Canada". Obviously it is not, and the federal government still refuses to release documentation regarding its decision.


All this is neither here nor there aside from establishing the fact that our government was privy to an agreement that included the possible relocation of a plant to a non-union area in the USA. Were they privy to corporate plans ? Who knows. All that can be said is that the ideology of our present government sees the interests of ordinary Canadians as worthless and merely an obstacle to be overcome.

Workers at London’s Electro-Motive Diesel plant have been shut out since January 1. Unwilling to accept a 50 per cent wage cut, they’re uncertain of their future as London City Council asks the provincial and federal governments to get involved.

Albrechtas is retired, but he had a good reason to be standing out on the picket lines on Oxford Street one grey, unseasonably warm day last week.

"I got three generations working here," he said, standing outside London's Electro-Motive Diesel Inc. "I've got my son working here and my grandson working here. They're both locked out. I'm retired (from the plant) now for 10 years under General Motors, but I'm here to support them."

And he wasn't the only one who came out to stand alongside the workers, locked out since January 1 after they rejected a blunt offer for a roughly 50 per cent wage cut from the Caterpillar-owned company.

"I want to support the people working here on the picket line," said retired educator Lynne Shantz. "They have a legitimate right to their workplace and the wages they've been making. I think the company did not intend to negotiate in good faith by coming in with a hardball offer like they did. It's pretty ridiculous."

Shantz said she'd like to see more Londoners come out to support the workers and said people should realize the fight going down at the plant could affect far more people than the workers in question.

"This is only the tip of the iceberg because along the line if people see that they can get away with this type of ridiculous offer ... then they'll be doing this again and again and again," she said. "This impacts people who are non-union as well and everybody is going to suffer."

Workers themselves are already feeling the pinch. With strike pay of $200 per week, most can just get by for now. But for some, that cash might be insufficient sooner rather than later

Take for example Vince Gugliotta and Sarah Smith. The couple — both locked out workers at Electro-Motive — are currently supporting four kids aged seven to 11 months old. Already they're watching the dollars and cents, keenly aware that they may soon be cutting into savings.

"(We're) eating in, shopping frugal, buying things only if it's an absolute necessity," Smith said. "We're just fresh into the lockout so we're not feeling the big impact right now. But a couple weeks from now, a couple months, we're definitely going to be feeling it."

She added that for their family, the prospect of going from $32 per hour in pay to roughly half that is simply untenable.

Out on the picket line, Chris Kwiatkowski agreed. Having worked at Electro-Motive for nearly 24 years, the last time he saw wages that low was when he just started at the plant.

He added he's hopeful city council's recent unanimous vote of support for the workers will draw further help from Ottawa and the province, which have so far been tepid in their desire to get involved in the lockout.

"Right now they (the politicians) are about the only people that can save us I think," Kwiatkowski said.

"I hope the government steps in soon," he said. "It's getting bad."

A representative at Electro-Motive said there was no one who could talk about the lockout situation.

Organized labour movements in Ontario have promised a day of action to show support for the locked out workers at Electro-Motive on January 21. According to a Canadian Auto Workers release, thousands of supporters are expected to converge on London to show solidarity with the workers in what has become a flashpoint for the labour movement in Canada.