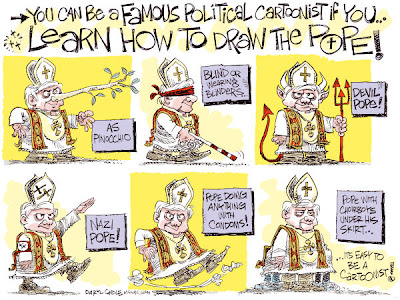 Amazingly enough I finished reading two books on a single day. There are two more rather technical books that I am still reading, but probably few would be interested in them. The first book I finished was the collected fairy tales of the Brothers Grimm. I've already mentioned said book here. The second book is Garry Wills' 'Papal Sin'. You can read it yourself here at Google Books. I hope the referral is right. I often make mistakes in long addresses.

I have to say that the book surprised me. From the title and a brief perusal I expected this book to get into the gritty details of medieval and Renaissance Popes with all the neat stories about simony, nepotism, sexual impropriety and political treachery. Nope. The network of deception that the author heads for began in the 19th century with Pope Pius IX. There is, however, more than enough dogs' dinner in the last 1 1/2 centuries to satisfy the most ardent critic of the Papacy.

Wills is hardly the most ardent. He is still a very devoted Catholic, whatever his heretical opinions. He denies the 1870 Vatican I promulgation of Papal Infallibility from the point of view of Church tradition in addition to the thuggish schemes initiated by Pius to gain the acceptance of his infallibility.

I must say that I enjoyed this book immensely, especially considered the recent death of my Sister Ann who was a nun with heterodox opinions. Wills begins his book with chapters showing the "bad faith" and lies of the Catholic Church. He saves his own reformist opinion for the latter chapters where he contrasts the views of the Church Father Augustine to modern Papal opinion.

Along the way he scatters gems such as the fact that the apostles were married; that there were no priests in the very early times of Christianity and no bishops until even later. He emphasizes the democracy of the early Church and suggests that this should be a model for today's Church.

What can I say here as an ex-Catholic and an atheist for over 45 years ? This book is obviously addressed to other Catholic believers. It makes an appeal to the "winter soldiers" who continue to resist foolish Papal pronouncements.I would recommend it for believers as an eye openers to the fact that there can be dissent in the Catholic Church. Perhaps even unbelievers could profit even more by reading this book. It may allow them to formulate their objections at a higher level.
Posted by mollymew at 12:59 PM