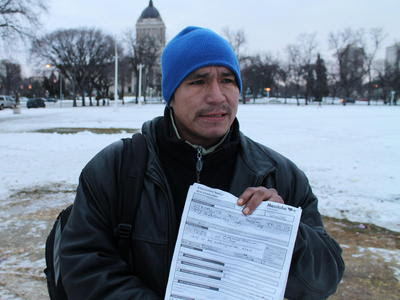 Last Wednesday December 21 the Province of Manitoba finally moved to evict Occupy Winnipeg from Memorial Park at, of course, 7:00 am. According to what I read Occupy Winnipeg was the last Occupy camp to be evicted in Canada. Not bad strategy on the part of the City and Province actually, especially considering the dispute about who is responsible for "peace"-keeping on Provincial land within the City. In the end Manitoba Conservation and the Winnipeg City Police outnumbered the hardy souls, three in number, who were still braving the cold in the early morning by 10 to one. Once more the mosquito was swatted with a sledgehammer.

Unlike other cities Winnipeg (along with the Province) elected to let cold and the street demons deal with their problem which they did in the end. Other jurisdictions elected to apply the iron fist much earlier. As can be seen this delaying tactic was, from the point of view of authority, much less damaging to said authority than showing off earlier. The final decision to evict was because of what I believe was fire number three at the site. The most likely arsonists are the street demons, especially those who were previously booted out.

The wife and I actually visited the site only three times, twice to bring food and once for a failed offer to cook Christmas dinner for them. On the last evening visit I saw evidence of the security patrols that they had instituted to try and prevent further arson, though Molly thinks that a weapon is better to clear thugs than a dragged along kid (for sure). If Occupy here and elsewhere want to attempt this tactic again in the Spring instead of moving on to new things as many have done they're going to have to be a lot better at security next time around. That, however, may be beside the point as many (most ?) locations are already doing new things. For local updates you can still check out the Occupy Winnipeg Facebook page.
Posted by mollymew at 1:49 PM

If you desire to take a great deal from this paragraph then you have to apply these methods
to your won blog.

Here is my web site :: freecams