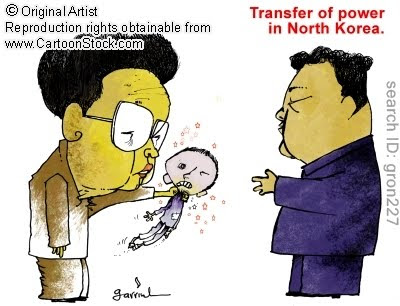 INTERNATIONAL POLITICS:
THE KING IS DEAD; LONG LIVE THE KING:


The news tonight is that the North Korean dictator Kim Jong-Il has gone to join his unlamented father in apotheosis. The Korean regime has in fact gone well beyond the bizarre mutation of a Marxist hereditary monarchy. It has become a modern day version of the Egyptian Pharaohs or the Roman Empire with the happily deceased (to those who were losers in the power plays) elevated to Godhood. Even Stalin at his worst would never have imagined the heights of glorification that the Land of Eternal Famine ,the North Korean state, has bestowed on its head executioner. There is little doubt that Marxist philosophy can lead its believers to strange acts of tyranny when in power and strange acts of justification when not in power. Still it would hard to imagine anything stranger than North Korea.

The NK regime will probably survive, but even that is uncertain. What is sure is that there is only one remaining "communist" dictatorship left in the world- Cuba. I wouldn't count China , Vietnam or Laos because they have retreated from totalitarianism and are now merely "authoritarian". The Cuba regime has much less chance of surviving a visit from the Reaper than North Korea does.
Posted by mollymew at 7:54 PM