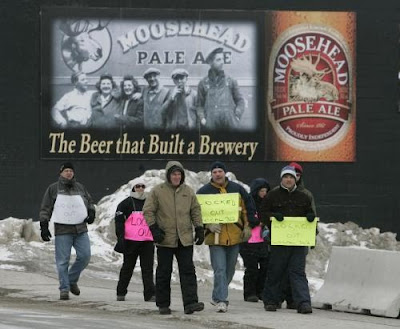 While I am not really a fan of Moosehead Beer there are many who are. Thus the following may mean a shortage of your favourite social lubricant. Too bad, but they really should treat their workers better. Here's the story from the CBC.
MHMHMHMHMH
Moosehead locks out 172 Saint John workers
New Brunswick Union employees say contract talks broke down Saturday night
Strike threatens Moosehead beer supply
About 170 workers are picketing outside Moosehead Breweries saying that the Saint John-based company locked them out over a contract dispute.
The workers, who are members of the New Brunswick Union, say they were given notice by the company after contract negotiations broke down on Saturday night, that they would be locked out on Monday morning.

When workers showed up for the evening shift on Sunday night at 11 p.m., their entry cards were not working.

Luke Coleman, vice president of the union, said the company surprised them with 24-hour lockout notice.

"We remain committed to getting a deal. The company is the one that has chosen to break this off and put us on the streets," Coleman said.

The contract ended on Dec. 31 and the two sides had been in negotiations since that time.

Workers say the main issue in the contract dispute is retirement benefits.

The union and management were not that far apart when talks broke down, according to the workers.

Joel Levesque, a Moosehead spokesman, said it was the union that walked away from the bargaining table on Saturday night.

He said the two sides agree on the principal sticking point being retirement benefits.

Moosehead now pays all of the costs of its retirees' prescription drug benefits.

Levesque said the company is asking retirees to pay 30 per cent of the cost of benefits, such as prescription drugs.

"In recent years, as everyone knows, the costs of drugs in particular has escalated astronomically," he said.

Despite the contract dispute, Levesque said he believes the two sides are close to reaching a settlement.

"We truly don't think we're that far away from a resolution," he said.

"There are many ways of approaching the issue of post-retirement benefits and we had a number of different scenarios on the table."

Beer still in storage
Moosehead workers are holding up vehicles heading into the facility.

The union members say an unusual amount of beer was taken out of the facility last week.

As of Monday Moosehead is not making beer in New Brunswick.

The company says it has plenty of beer in storage. But the union members are pretty sure Moosehead won't be able to resume production without them.

Moosehead Breweries is Canada's third-largest brewer.
Posted by mollymew at 10:34 AM