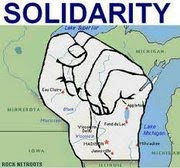 
The standoff in Wisconsin continues as the Governor refuses to negotiate concerning his anti-worker legislation, and the people protesting the Bill continue to demonstrate and occupy parts of the legislative building. Meanwhile similar union busting legislation is also under debate in other states as the various governments attempt to unload their financial crises onto the backs of public employees.

Here's an item from the United Food and Commercial Workers (UFCW) about what you can do to stand in solidarity with American public service workers.
WWWWWWWWWW
Join Wisconsin's Workers: a Last Stand for the Middle Class‏
You've no doubt seen by now that tens of thousands of working Americans, including UFCW members, have come to the Capitol in Madison, Wisconsin to rally, protest, and make a stand for workers' rights. It's no exaggeration to say that what's happening in Wisconsin is of great importance to working families. It may be our last chance to save our shrinking middle class.

Republican Governor Scott Walker's attempt to strip public workers' collective bargaining rights under the pretense of balancing the state budget has got working Americans all over the country up in arms. Especially since Wisconsin's budget was in great shape until Governor Walker decided to reward his corporate buddies with tax breaks.

It's the same old corporate greed that we've seen chipping away at the American Dream in the last few years, with politicians exploiting working people while stuffing the pockets of their Wall Street cronies.

But it's clear as the momentum keeps building and the movement keeps growing in Wisconsin that this is no ordinary protest. And now workers nationwide are joining with Wisconsin's workers to make a last stand for the middle class. Click here to find out more info on where and when these rallies are happening, and if there's one near you.

These are families who have seen years of Republican fiscal irresponsibility—and are saying, no more.

These are union members who are tired of being scapegoated by the same old politics—of being told that they're responsible for this fiscal crisis, rather than the CEOs and Wall Street speculators that drove our economy into the ground.

These are students and teachers and parents and nurses and firefighters and retail clerks and plant workers and auto workers and steel workers and plumbers and truck drivers and public employees—these are the ordinary working people that make this country strong.

And they have had enough.

It's not just in Wisconsin, either. In states all across the country—maybe your state, too—Republicans are proposing bills to take away workers' rights, to destroy the unions that serve as the last line of defense for America's middle class.

Click here to find out here what's going on in your state and what you can do to help.

And call your elected officials to let them know you oppose any such legislation in your state.

So the middle class is making a stand in Wisconsin. And if we can stop Governor Walker there, we can stop similar attacks on workers across the nation. It's so important that we stand with our brothers and sisters in Wisconsin, as well as in Indiana, in Ohio, and all over the country.

Click here to find out how you can help workers stand up for the middle class and save the American Dream—before it's gone for good.

Joe Hansen
UFCW International President
WWWWWWWWWW
Here's another proposal to show solidarity with the workers of Wisconsin. From Local 668 Chapter 13 of the Service Employees International Union in Pennsylvania....
WWWWWWWWWW